Sorry about the double post yesterday - mom planned the one about the new kitts for today but hit the wrong button. Good help is so hard to find. :)  MOL

Anyhow, mom fed the kitts last night and was watching TV when the phone rang. It was Bug's mom - they caught the momma cat!!!! Wahoo.......  Mom got right in the car (ok, after finding some shoes and running around the house) and went over to pick her up. She came back and got everything set up. 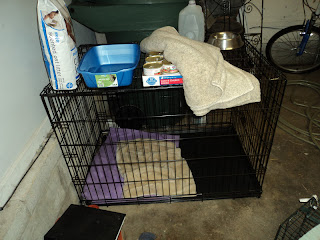 Mom borrowed a big wire dog crate from our friend Miss Kelly. She put the blankets inside and then..... 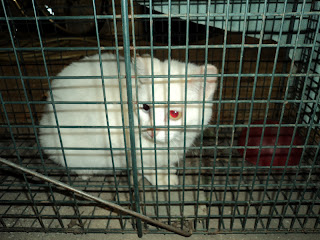 Meet "Grandma" as she is called in the neighborhood. This is the cat they were sure they were seeing with the kittens. Mom got her in the crate and then put in the kittens and food/water/litter.

She checked on them later in the night (though didn't take any pictures - have we mentioned the thing about good help). Grandma was eating, but the kittens were nursing. She decided to give it to morning. And while the food was gone, it didn't appear the kittens were eating. Grandma was being nice to them, but either those aren't her kittens or too much stress from being trapped and moved.

So a decision had to be made - in order to bottle feed the kittens, mom had to get them out of the crate. She decided to "re"trap Grandma and grab the kittens. And since she was in the trap, she got dropped off at the clinic today. Mom says the kittens are doing ok as bottle babies and the routine isn't too bad, so she is just going to take Grandma back to the neighborhood and release her.

Didn't work out the way we wanted, but hey....one more girl cat spayed!!! Plus the 2 boys from the previous days. Not bad if we do say so ourselves. And the neighbors want to continue to borrow the traps to keep doing TNR. Mom says for that alone, and setting a good example for the kids, she can bottle feed a couple of kittens. (guess this means we should let her off the hook for the picture/button hitting thing, huh?)
Posted by Random Felines at 11:56 AM