First - could we ask a favor? Our grandma is having surgery today on her wrist and could use some purrs. They are having to put in a pin and freeze a joint due to arthritis.  THANKS

Also, mom got a text yesterday that made her all leaky. You know our friend Miss Kelly?? She had to help her old mancat Murphy over the Bridge yesterday. He had been diagnosed with the evil cancer about 4 months ago but was taking a chemo pill at home and doing ok. He had a great day outside with her on Saturday while she planted flowers. And then was sick Saturday night and most of Sunday. Mom says she doesn't know exactly what happened Sunday night, but she knows Kelly would have done whatever she could for Murphy. He showed up at her house in college at about a year old as a beat up tomcat and turned out FIV+. He regularly beat up her dog and was the true man of the house. Safe journey Murphy - and we love you Miss Kelly!!!

Mom got a call Friday night. Grandma the cat was moving the kittens. The kids caught two but two got away. They have moved the trap and are going to keep trying, but mom says for all their good intentions, the kids aren't very quiet, so we don't have much hope about catching them. But we got our paws crossed.

Anyhow, mom came home Friday night with 2 more kittens. This crew is officially known as the Outlaws. You have met Annie Oakley and Wild Bill. Here are the two new ones: 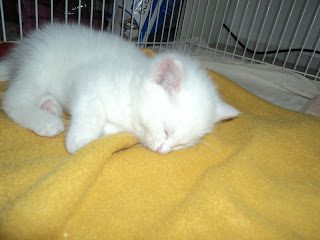 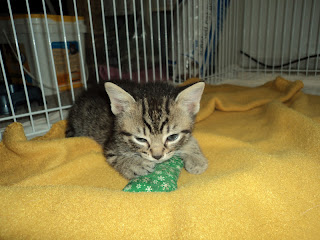 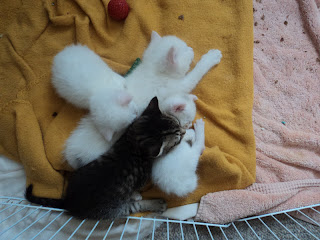 Wild Bill has been spending some time in "time out" since he keeps trying to nurse on Annie (and not in a good way). But, while the "new" ones are bigger (yep, bottle babies just tend to be smaller - those momma cats do come in handy), they are teaching Wild Bill and Annie to eat off plate. And Sally cleans him up some, so that helps too. Friday night they spent in a crate, but they moved to baby jail on Saturday and have been in there ever sense - they aren't big enough yet to escape on their own. Annie is now crated as of this morning. The bigger two smoosh Bill to keep him from nursing. And Annie hasn't pooped in a day or so and mom wants to keep track of her - she may end up at the v-e-t tonight.
Posted by Random Felines at 8:57 AM