Mom is very thankful that our v-e-t comes to the house - and we are thankful we don't get shoved in the PTU. Also, when our previous vet clinic was bought out, mom was told that she would not be allowed to bring us more than 3 at a time....great.....

Hannah and Lucy asked about the cost and it is actually comparable to an office vet. The only difference is her travel charge, but she tries to schedule in similar areas at the same time to split that among several clients. Though mom thinks some of us (MO) might behave better in an office, it isn't worth the stress of shoving everyone in carriers (and having us pop back out get shoved back in etc), dragging the carriers to the car and waiting in an office with several cats singing the "let me outta here" song.

Mom is also thankful that Silver is....peeing in the box!!!  Mom and Silver did the potty dance the other night. Mom was getting ready for bed, Marble was eating and Silver was goofing off. Then she got in the box, scratched some - and ate the litter (which is why you use clay litter until you are really sure about kittens - the clumping stuff swells up). Then she chewed on the box (mom uses a small cardboard box that the cans of kitten food come in since she buys in bulk). Then she squatted down. Got out of the box and assumed the position. Mom put her back in. She got back out. In, out, in, out. There are no pictures or video - honestly since it went on for a couple of minutes, it got a little boring....  However, in the end, mom won, Silver peed and we are one step closer to independent kitten!!

Marble can't wait for the day she gets to post a thankful thursday that the kit is EATING on her own (which she may be doing now but mom has yet to catch her in the act and she has caught her still nursing).

But, here is what we are REALLY thankful for. See, after Tommy's 2010 adventure mom has only opened the windows a crack. That head alpha mancat screwed it up for the rest of us. Mom thought she had a solution - she remembered these inserts that her grandparents used to use in their windows in the summer. She looked around but couldn't find anything. She was going to resort to asking grandpa to make her something, when Miss DeLynn bought her a birthday present: 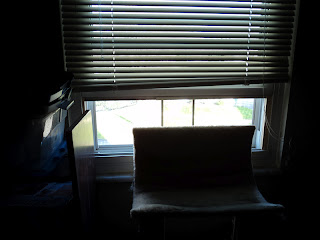 They fit in the front of the window. So, no more sleeping in the window sills, but at least the windows are open more than a couple of inches. They were at a local small hardware store (another good reason to avoid those big box stores). Mom wants to get a couple more for other windows!!
Posted by Random Felines at 8:57 AM