We weren't sure how many of you had heard about this, so we wanted to get it out there.

Loews hotels in Florida had a feral cat problem. One of their bellman - out of the goodness of his heart and his own pocket - started doing TNR. The hotel management didn't seem to care one way or the other. And the maintenance department even built feeding stations for the cats that matched the hotel. The colony population went from about 40 to 8.

Then a change of management and the cats became a "liability". Though we wonder cause they have never said how they came to that decision. Traps were set and the cats were going to be taken to a local shelter - and we all know they would have been euthanized. Riverfront Cats stepped up and was helping to keep the cats from the shelter. They are also helping organize people to let Loews know they are making a bad decision. You can check out their efforts to stop the move on the Facebook page.

Right now, they are organizing a letter writing campaign - if you can write a letter, sign it and scan it, please email it to Riverfrontcats@yahoo.com and they will cover the postage to mail all the letters together.

It bothers us....so many people are suddenly taking flack for doing the right thing to help these homeless cats and lower their population. Disney has a feral cat colony that is controlled. At least one casino in Las Vegas got help from Best Friends and now has a controlled colony (they choose to remain anonymous to keep people from dropping off cats there).

So, please like their facebook page and write a letter if you can. Loews claims to be "pet friendly" and a good corporate citizen - but that apparently doesn't extend to the cats that are living on their property. 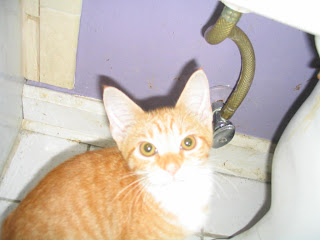 Some of you may remember that Junior was live-trapped when we helped control our local colony...this was his 2nd day in the bathroom. While mom isn't allowed to pet him, he at least doesn't look this ticked off anymore....  But imagine him being trapped by this hotel and relocated (which doesn't always work) or euthanized....just for being born outside.
Posted by Random Felines at 8:54 AM