Happy Friday the 13th....May all your luck be GOOD!!
As you all know, we got new foster kitts last Friday.....and they were SNOTTY!!! Poor trailer park babies - don't know what gushy fud is, have earmites and had fleas, nasty URI.....  BUT - now they are safe and friendly and getting better....

So, Tuesday night mom was in loving on the babies. And she picked up Mocha and felt something...strange. Like the ribs on her one side almost folded in. Now, mom doesn't freak out about much anymore, but she was concerned. Did someone hurt Mocha? Was this going to hurt her as she grows? We needed some answers.

Mom is lucky that she works for a small office (ok, not so lucky in some aspects, but they humor her rescue stuff). She left early yesterday and got Mocha into see a v-e-t at Rascal. Everyone was very enamored by the cute!!  :)  The tech checked her out and felt her side...yep, strange. She took Mocha back to weigh her and when she came back said she had passed the vet and when they got their hands on Mocha agreed an x-ray was in order (which mom had presumed). So, Mocha got her picture taken (she was very good according to the tech). Then the v-e-t came in to see them.

Great, mom thought....I paid for that??  But the v-e-t smiled and said that she thinks everything is fine. They will have a radiologist take a look to be sure, but the v-e-t thinks it is a birth defect. The ribs on that side curve over like they are supposed to but then sharply turn in toward her lungs. And the v-e-t said her floating rib was REALLY floating out there. Mom asked about effects when Mocha grows. The v-e-t said she doesn't think it should be an issue, but understands the concern especially for potential adopters. She said that as Mocha grows, her ribs should grow at the same rate and while they won't straighten out, they shouldn't cause any damage. No guarantees, but at least good news. Mom talked to the rescue lady and they all agreed better to know now and be able to tell people - or be able to fix something now when she is little.

Oh, and both kitts got their ears cleaned and medicated again. 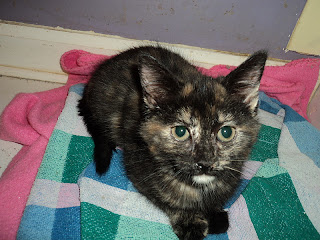 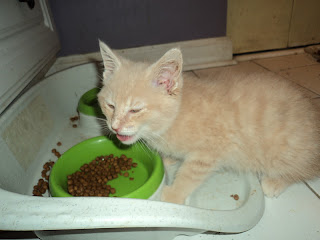 Caramel says "stay away from my dinner" (either that or he was pre-sneeze)
Mom let them out for the first time last night. Mocha played in the back bedroom. Caramel made it as far as the hall....and ran back into the bathroom when he saw himself in the mirror on the back of mom's bedroom door. MOL!!!﻿
Posted by Random Felines at 9:39 AM