First, mom loved all the comments from yesterday. Carolyn asked if the boys pay rent - mom snorted and muttered something about "if only...."

So, we were thinking about all the things we are thankful for, and as we start a new year, we want to point out those people we think about alot....

THANK YOU to:
Those who rescue - be it for a non-profit or just on your own

Those who foster - what an amazing start for these animals

Those who choose to ADOPT!!

And that leads to this: In April of 2011, a beautiful torbie girl came into the shelter. She was named Esmerelda. 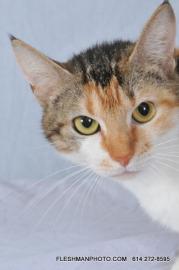 She did ok at first, but mom said she could tell that Es was getting depressed the longer she was at the shelter. She moved from a cage to a real room with other cat roommates. But, she wouldn't greet people and just didn't seem to care.

About a week ago, she and another cat named Butterscotch went to Petsmart. And on this past Saturday, an application was faxed over from Petsmart for Esmerelda. Single middle aged guy. Owns his condo. Had cats before but no current pets.  YEAH!!!

He was approved....seems he had been in to see her about 3-4 times. And when it came down to it, he couldn't leave Butterscotch, so he ended up taking both girls!!

So, today we are REALLY thankful for:

CAT GUYS
Posted by Random Felines at 8:56 AM