Some of you may have heard mom complain about the relationships around here that revolve around Spud. For the longest time she thought it was just Spud and Ivy doing the too-close-in-age thing. Spud gets Ivy cornered, she hisses, he won't back down and the chase is on.

Then it evolved to Spud and Junior. If Junior got too close to Spud's personal space, then a battle would ensue. The problem with most of these battles is that the others can't just watch - Tommy especially feels the need to engage. And it doesn't help that Junior doesn't have the sense to back away slowly. :)

Mom asked the v-e-t Dr Taylor about Feliway. She said it sorta works but not reliably enough to justify the cost. She suggested more vertical space, so mom cleared out one of her shelves - and of course the only one she has seen up there is Mozart. (and mom won't medicate Spud - he is skittish and she is afraid of making him even more tense by trying to catch him everyday)

Well, it got worse over the weekend - mom has now caught Tommy stalking Spud across the living room. She distracted Tommy a few times, but other times he got away and would chase Spud down the hallway.

Poor mom often thinks that Spud might do better in another home but she won't put him through that. When she took him in as a kitten it was with the intent to get him big enough and then take him to the shelter to be adopted. But he looks a lot like our Angel Tigger and mom has some guilt issues, so Spud stayed.

Plus she knows that 7 adult cats in 1000 square feet isn't ideal either.

But, here is where is gets more interesting....Mom caught Spud sleeping under one end table last night. She thinks he ended up there cause Mo was sleeping on the/spud's floor vent. MOL  But she got to thinking....what about putting one of those soft cubes under the end table for Spud to sleep in? He would have his own space (assuming someone else wasn't sleeping in it). But she is afraid he will feel cornered. We think if Spud had his wish mom would leave him in the bedroom all day by himself, but she doesn't like that option for a number of reasons.

So, anyone have any suggestions? There is a limit to how much cat furniture we can put in the living room. Mom is considering turning part of the 2nd bedroom into a foster fort and that will clear some floor space for an elevated bed or another tree, but that may not happen until later this winter. Mom just worries about the stress this causes everyone here. All ideas welcome..... 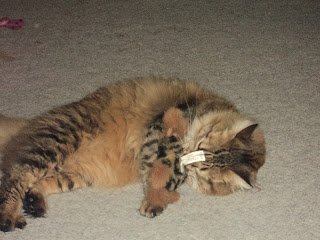