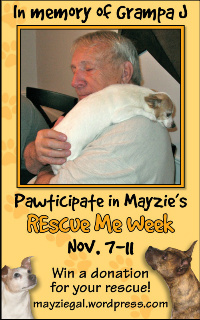 Once again, we are pawticipating in Mayzie's Rescue Me Week.

Today we are doing something a little different. If you have been following us long, you know that we foster kittens for a couple of different local groups. Mom also drives transports sometimes on the weekends. And sometimes she gets a phone call from a friend that needs some help....

She got one of those calls last week. She and Lisa used to work together. Lisa now lives with her mom who has Alzheimers and they have 6 cats between them. There are also community cats behind the house that her mom used to feed and the neighbor is now taking care of. However, the neighbor thinks that Lisa and her mom need to be responsible for any kittens (yes, we had the conversation about TNR and they are working on trapping the adults). The neighbor had brought over 3 kittens....mom emailed the shelter and they were able to take them. Well, on Monday mom got an email from Lisa and they found two more - mom told her to bring them over since Danny & Mason were on the way back to the shelter and Kiari and Cloud were at Petco. The kittens came on Wednesday: 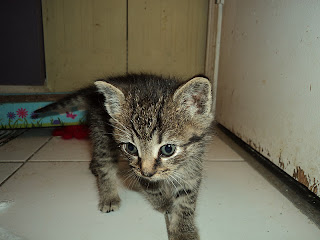 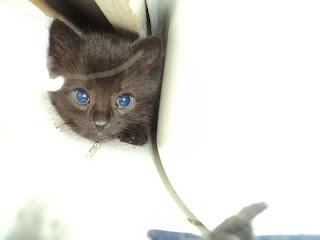 Baloo
Now, we could use some purrs for Mowgli. Mom gave them both a bath last night due to fleas. She worries that she didn't get him dry enough and warm enough cause when she checked on them around 12:30am, Mowgli was wobbling around and cold. Mom FREAKED OUT!!! She called the 24 hour vet that helped with Swizzle and took him up there. He was so cold his temperature didn't register. They got him warmed up and some fluids under the skin. Mom and the vet agreed to leave him there overnight - mom has some skills, but he was better where he could be closely watched and eventually they could get an iv in him. Mom called this morning (took her 30 minutes to work up the courage) and he is still alive....thank heaven - we don't think mom could stand one more heart break right now. They got his temperature up to normal and an iv in him. But they aren't sure he is completely out of the woods and able to regulate his own temperture quite yet (the guess is that they are about 3-4 weeks old). So he is still at the vet and mom is stopping after work to get a space heater for the bathroom (we are a little jealous).

So, this time it is about rescue kittens that WE helped rescue. These boys will be in the bathroom for another few weeks - have to get them tested once they are a little bigger. We are hoping to get them into the shelter system since they will get adopted so much faster, but mom says we will cross that bridge when we come to it.

We want to add our thanks to everyone who commented on our posts and everyone that posted....we know how important even just a little more knowledge of the animals out there.
Posted by Random Felines at 8:54 AM