The yetis made it home safe...though cold. :)

Mom was supposed to drive a transport on Saturday.....but a couple of legs didn't get filled, so she was off the hook.

However, she did end up working at the shelter on Saturday afternoon.  And, guess who got adopted?? 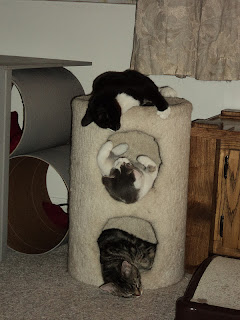 Troy and Trevor were adopted together. Troy went home but Trevor wasn't quite ready as he is on drugs for URI.... hopefully he will be ready early in the week and join his brother.  Mac was also adopted by another family. Plus there were 3 adults adopted as well.....a good Saturday.

Sunday morning mom and grandma went for a walk to support step up for stefanie to raise money for breast cancer awareness. For those who follow sports, Chris Spielman quit the NFL back when his wife Stefanie was diagnosed with breast cancer. She lived several more years but since passed away. He joined with Panera and OSU Cancer Centers to raise money.....first year and there were 4000 runners/walkers and they raised over $100,000.

And Saturday night was a nail biter according to mom....as Sparty managed to beat those Badgers in the last 10 seconds.....
Posted by Random Felines at 8:48 AM