We are thankful for local rescues.....and for those foster monsters - but don't tell mom!!

And we are thankful for the CB and good friends: which is why we are asking for some help. We are going to help Chrystal transport a kitten but we need help getting him from Illinois to Ohio next weekend. Live somewhere in there? Wander over to cats with your coffee and let her know. Or post a comment here and we will hook you up!!

Troy, Trevor and Mac are doing....ok. Trevor and Troy are good if they are out. Troy got a good look at mom last night and HOWLED to get out. And mom got an email from the cat caregiver about Mac on Tuesday. Seems he is having some adjustment pains - he is growling at everyone. The boys are set up in adjoining cages with the portholes out so they can go back and forth and keep each other company. Mom had a "talk" with Mac and we hope he starts to behave. She did have them out to play and he was playing and a little calmer when she left to come home.

Speaking of coming home - she brought us: Kletus. The shelter has some major URI/snot problems with the kittehs right now. So when she said she was bringing back Troy, Trevor & Mac, she was asked to take a sickie. Of course, they don't know about the gray kits in the bathroom. And telling them would just get mom in trouble....long story.... Anyhow, she asked who they were thinking about? (maybe it would be an adult - can't take those - Tommy's head would BLOW OFF!!!) Kletus....yep, a hillbilly boy (his brothers were Bobbi Bob, Jim Bob, Joe Bob and his mom is Cindy Sue). 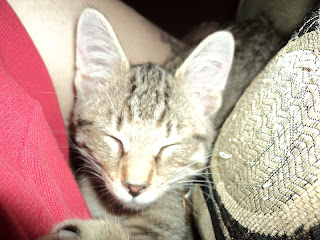 He is smaller that the other boys, so mom decided to try him in the bathroom. Bad idea!!! Kiari and Cloud DO NOT LIKE HIM!! He wants to play and they scream. A lot....and very loud! After listening to them last night and while she was taking a shower, she punted him out of the bathroom. And we had to deal with his wound up little self ALL DAY! sigh......  Mom loved the comments from yesterday. She tried so hard to get a cute picture and he would not cooperate.....but he does look like he is playing an instrument.  And those nails?? They got clipped!!

Mom did decide to put him back in the bathroom last night for bed and things went ok until this morning and so she put him back out with us.

Posted by Random Felines at 8:35 AM

Email ThisBlogThis!Share to TwitterShare to FacebookShare to Pinterest
Labels: Kletus