Short post for now. I got home last night and fed my crew but was greeted at the bathroom door by 3 kittens - not 5. The other two were on the bed and not moving. The tinier one couldn't even stand up under his own power. I wrapped them both up and headed over to the rescue. They are with Mona (the leader) right now. I am hoping for an update this morning. Both got fluids, but I have my doubts about the tiniest gray one. The other is the striped tabby boy.

Plus, there are normall at least 3 of us at the shelter on this Tuesday. I got there over 30 minutes late and the lights in the cat room were still off. No one showed up. I knew the one girl wasn't coming but hadn't heard from the other - though I had sent her a text letting her know I was running late. Found out later she was sick as well. Fortunately my friend DeLynn lives close - she gets the big gold star for coming in to help me clean. 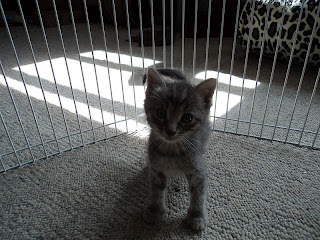 His brother Riku is holding on but it doesn't sound good. 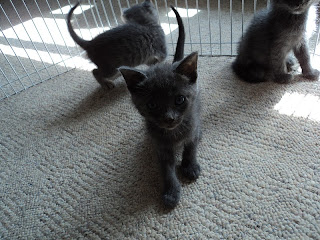 I know this is a possiblity every time I take kittens - especially from this rescue since she will take those cats that others won't - I know these kittens probably wouldn't have even made it into foster with the larger shelter around since they came in so snotty. And no matter how much I know that they were safe and loved for the time they were here, it still sucks to lose such a tiny life.....

Posted by Random Felines at 8:59 AM