We are going to reserve Zim's suggestions for another group - they just don't seem to fit this crew.

Mom caught the spit fire last night and it is official: we have 3 girls!!!

The white females that were TNR'd were named Annie & Oakley (Annie is the mom to this crew). So, in going with that, mom decided to go with famous people. 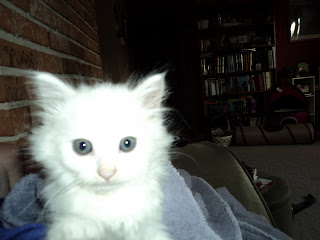 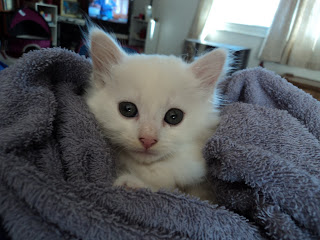 Audrey (Hepburn) - caught Tuesday - shy but coming around (also fuzzy like Grace)
And then there is Lucy (Ball). She is the short haired spitfire. Mom was going to try to get her picture but the battery in the flashy box died (haha!!) and had to be recharged overnight. So mom took some video instead  ﻿(Lucy is the one at the end that spits at the camera)
She also got some of Grace playing in the bathroom. Toward the middle, she runs over and is trying to get Audrey out from behind the food dishes.

Posted by Random Felines at 9:08 AM