Long week, but no weekend plans. Supposed to be in the 60s with a possibility of rain here - what else is new.  ;P

Got the test results on Swizzle. The numbers were a little off, but nothing major. So, good news, she should be fine, bad news, we have no idea what caused it. sigh....  The v-e-t did ask if the blood was drawn prior to her tube being pulled and said that might make the numbers off. So, she will go back in a week or so to have more drawn and another test run just to be sure.

Mom laughs at her - the baby gate is up in front of the bathroom door. Most adults will just jump the gate - Swizzle climbs over. Mom isn't sure if she isn't strong enough yet to jump (though she gets up on the counter by the sink) or if she just hasn't figured it out (her kittens climb it). Mom opened the bathroom door this morning and Swiz climbed out. Mom left the door open a crack when she was taking a shower and when she opened the door, Swiz was perched on top of the gate - she climbed down when breakfast was served. MOL

Oh, and in other developments, check out this picture from last night: 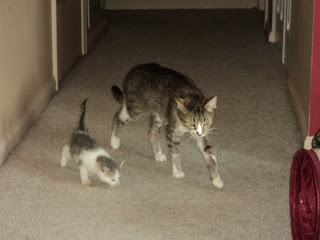 Mom was watching TV when Miss Malibu came walking down the hall - Swizzle met her halfway chirpping at her.... So much for the baby gate. Maybe time to break out the pen (you can see it here set up as Bug's condo.
Mom put a jingly ball in the bathroom and someone is having a good time - not sure if it is the kittens or Swizzle. Either way it makes mom smile when she hears it - it was as similar toy that she put in there for Junior and hearing it reminds her of how she knew he would be OK when he was playing at night.

The kittens are getting better at eating canned food and Mojito has been caught eating the dry. They have been out a few times and are having fun!!! 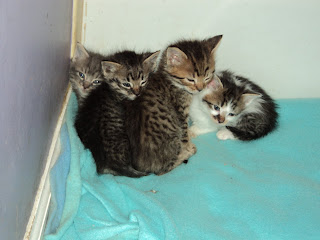 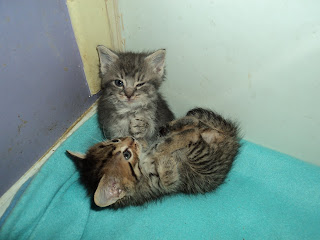