Mom spent a lot of time last night trying to readjust her thinking about this week and coming up with things she is thankful for. It didn't take long to come up with a list, but....

Then she got a true "pick me up" this morning.

Mom has been working with some of her neighbors to TNR the ferals/strays in the neighborhood. It is tough since no one has volunteered to help monitor the trap or take it to the clinic. But, they have one neighbor who feeds a couple and can set the trap at night. She has some physical limitations though and wouldn't be able to pick up the trap and take it to the clinic. (it isn't heavy, but it is awkward and can be hard to handle with a ticked off feral cat doing the hokey pokey in it)

Anyhow, mom told Jodi to set the trap last night since it is finally not freezing at night and has stopped raining (for the moment). She went to bed last night figuring they wouldn't catch anything first time out.

Boy was she wrong. She got over there this morning and the trap door was down. And inside was a very ticked off short haired gray cat. Mom said she almost did the happy dance around the car (that woman is weird - all happy and dancing about catching cats in traps...sigh). It wasn't the one she was expecting to catch, but it is still a catch. But she is on a mission....she REALLY wants to catch Junior's daddy. :)
~~~~~~~~~~~~~~~~
What are we thankful fur?? The weather was nice enough last night that mom opened the screen door and the windows. 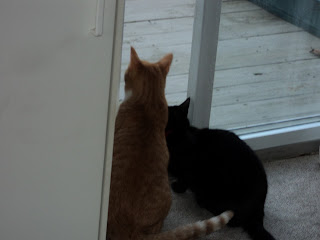 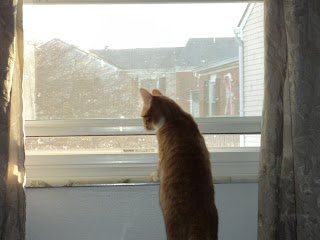 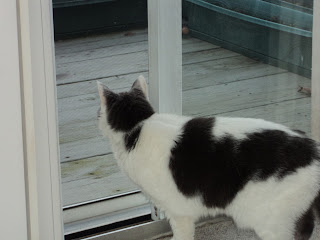