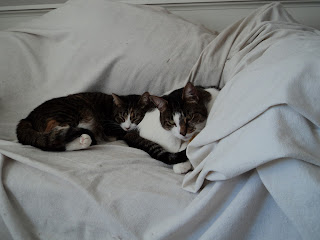 Mom was sitting on the floor last night trying to get some stuff organized and we were snoopervising helping.  Except mom said we were being a pain in the (bleep).  Hey - mom said another bad word.

Yeah - so get over it. I was tired of pulling cats out of strange places last night.

Anyhow, she watched that dog thingie. She gets a kick out of it. She does say that she likes that David Frei guy cause it calls it like he sees it and doesn't sugar coat the dogs. He will say if this is a great starter dog or if it should be owned by someone with experience. And the Pedigree commercials get mom all choked up. :)

Speaking of which, mom hasn't said much about this before, but she is pretty fired up now. Seems that Oprah is having the (BLEEP) Vick on her show. http://msn.foxsports.com/nfl/story/Michael-Vick-booked-on-Oprah-Winfrey-Show-021411/?gt1=39002  WHAT????  Seriously, can someone explain to us why this guy is suddenly forgiven?? He does a few months in jail, a few service things for HSUS and gives them some money, and it is all OK. NO!!! Those dogs suffered and it is taking years to get them rehabbed and into homes and he is using it to further his career and make millions. I say let him live in a trailer and his salary goes to Bad Rap and Best Friends and the other rescues that took these dogs. I don't care how much he paid up front....it will NEVER be enough for what he did.

Francis Battista is one of the founders of Best Friends and wrote two blog entries about this:
1. never say never
2. mr president

And honestly, it isn't just him....I was talking to a girl in the office this morning about the tendancy to forgive athletes no matter what they do. What is it about sports figures (or famous people in general) that gets people to say "oh, that is OK?" WRONG WRONG WRONG