Where did the extra hour go???

Well, Bug is schedule for her spay surgery on Wednesday.  Mom weighed the rest of the kittens last night.  See, the plan was to take those that are big enough to Grove City on Thursday to have their surgery done by NOMAD.  Only one small problem....Dakota is the only one that weighs over 2 pounds.  Mom let out a very big sigh....this means only Bug and Dakota can go to Petsmart on Saturday.  She sent a text thingie to the leader of the rescue who agreed it would be faster to just take Dakota with Bug on Wednesday and then get them both microchipped on Saturday before the event.  (everyone else is between 1.4 and 1.75 pounds...except for Miss Utah who weighs a hefty 0.9 pounds)

Then there is Chiclet.  She is doing VERY much better and is anxious to get out of the bathroom.  We can't seem to get anyone to tell us if she was spayed when she had her surgery last week, so we aren't sure if she can go to the adoption event on Saturday as well.  Mom was a little annoyed this morning when she called the clinic that did the surgery and got voicemail that said they would call her back in 3-5 business days.  WHAT????  How do you run a business like that??

We thought we would take a look back at how far the kittens have come.  The first pic was taken when they got to the house on Sept. 19.  The second pic was taken 11-4 (thought Utah is missing from that one). 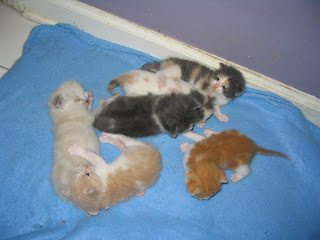 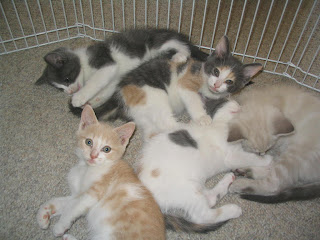 Posted by Random Felines at 9:02 AM