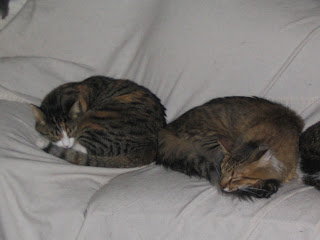 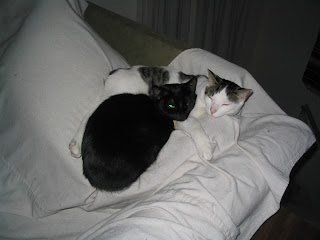 We are so glad it is Friday....we are saving up on the naps!!
Update on the kittens.  Mom got home last night and shrieked....the pen got loose and there were kittens out!!  3 in the pens...Georgia was curled up in the bed next to the pen.  Utah, Nevada and Bug (go figure she was involved in the jail break) were nowhere to be found but wandered out a few minutes later.  No telling how long they were out or where they were.

Mom changed the plan today....she moved their stuff into the kitchen and set the gate up in front of the kitchen entrance.  Cross your fingers that everyone is still in there when she gets home.  It gives the kittens a little more room to run around since she doesn't trust them to be out and about in the house by themselves yet.  When she was leaving this morning, Carolina and Georgia were "hiding" between the fridge and the wall and Maine was jumping around trying to get them.

Maestro is doing ok.  He has been on prednisone and pepcid for 3 days now.  Someone pee'd outside the box again, but she can't ever seem to catch anyone in the act - the downside of having a multi-cat household.  She was pretty excited about this ginormous box she found at Petsmart, so we may get an upgrade this weekend.  She hasn't bought the new food for Maestro yet, but hopes to get to is this weekend.  She is just worried that she is going to spend a fortune on food that he isn't going to eat.

Chiclet (the momma cat) threw up twice last night - mom was doing laundry at 9pm since the "big one" was on the cover on the sofa (she was feeling kind of smart for making sure the covers are on).  Mom gave Chiclet a pepcid too hoping that might help.  She just doens't seem to be putting on any weight and has been a little listless.  Mom hopes to get the rescue vet to check her out next week.

Plans for the weekend everyone???  Mom keeps saying something about the big MSU game on Saturday versus Iowa.  Someone warn the kittens since she likes to yell at the TV.  Whatever....  Us - we plan to try to find as much sun as possible to warm up in since it is getting colder here in Ohio.
Posted by Random Felines at 9:24 AM