I got to meet Teri and Brighton from Curlz & Swirlz.  They were at a cat show in Wilmington Ohio this weekend and that isn't too far from where I live.  There were all sorts of cats but it was a Cornish Rex specialty, so there were LOTS of those. 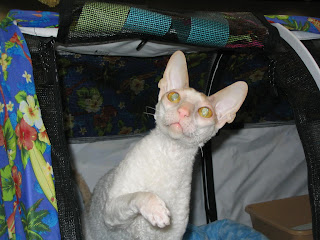 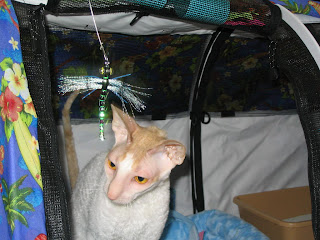 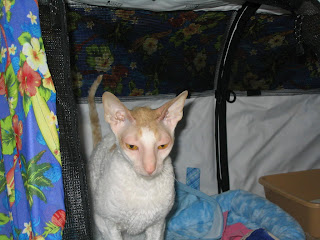 I happened upon them at first by accident.  Brighton was being judged.  I looked over a woman's shoulder at her program and realized that Brighton was in the group I was seeing.  They got done and I let them get settled before introducing myself.   There were smiles and hugs and Teri generously let me pet Brighton - which is usually not allowed at cat shows.  He is so soft - I have never been around Cornish Rexes before and it was fun.  I got to observe kitten judging, which was a riot....they are all howling and jumping around.  Some of the judges just judge, but there was a great one who made comments about breeds and the cats and was great to watch.  She judged some long hair cats which included this HUGE Maine Coon kitten - the owner said he weighs about 18 pounds and he is only 9 months old.  I wish I had gotten a picture as he was very handsome as well.

I did get to see Brighton get judged before I left for the day.  Don't laugh too hard at the video.  I don't know what I am doing and didn't realize I shouldn't have changed the direction of the camera.  Plus I have NO idea how to edit.


There was a no kill shelter represented as well, so of course I made a donation and bought some toys before I left. 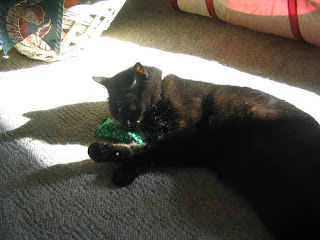 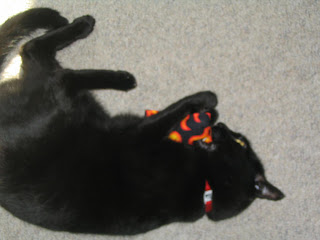 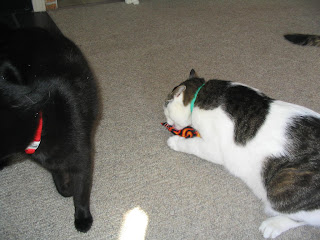 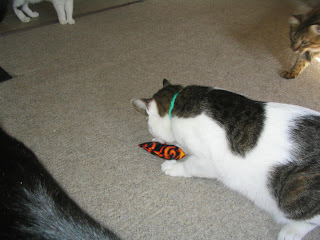 Posted by Random Felines at 9:05 AM