Miss Ivy needed her nails again.  Kelly was again available and willing to help out.  This time I decided to employ the ace that the vet sent us to try.  I grabbed Ivy about 1:10pm yesterday, gave her the pill and stuck her in the bathroom for easy finding later.

Kelly arrived around 2pm. She ooohhhed and ahhed over Bug and even got to hold Junior for a few minutes (OK - he was unwilling, but he let her do it which is HUGE).

The moment of truth.  I opened the bathroom door.....and shut it so I could laugh.  OMG - she was sitting on the floor, upright but back legs splayed out to the side, third eyelid about halfway up and looking seriously drunk.  Kelly asked what was so funny...I tried to describe it.  "How much did you give her?"  "One whole pill."  "I only give Murphy a half."  "Yeah, but Ivy is more ornery - or she used to be."  (snicker)

So I pull myself together and grab the princess.  She growled, but it wasn't as bad as normal.  Only one scream and no poop.  YEAH!!  I still had to hold her while Kelly cut, but it wasn't nearly as bad as without the ace.  I was hoping maybe to be able to do it myself, but I don't think we will ever get to that point.  Next time I promise to try it with 1/2 a pill.  :)  It took her the rest of the afternoon and evening to sleep it off.  I did manage to keep her from trying the stairs.

This was her first attempt to find somewhere to sleep it off: 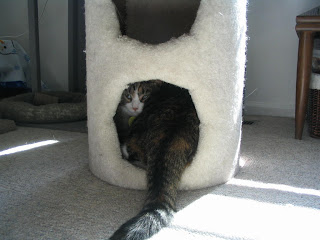 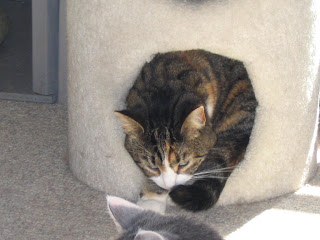 Posted by Random Felines at 1:44 PM