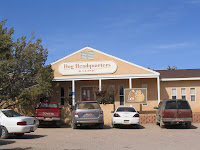 I went to the dogs on Tuesday. Everyone signs in at headquarters and watches a safety video. Then you are given a whistle - if something happens or a dog gets loose, you are told to stop and blow the whistle until a staff member gets to you. 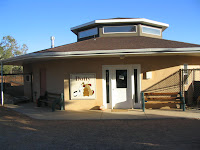 We went to Fairways in Dogtown Heights to help out in the morning. Most dogs are housed in octagons....most of then in groups. The caregiver here helped leash up dogs and we took everyone for a walk. Some on the long trail and some on shorter ones depending on health issues. It was harder than you would think - everything is sand out there and going uphill is a different thing. Not to mention getting sand in so many different places. By the end of the morning I had sand in my shoes and in my hairs...and my socks were a different color. 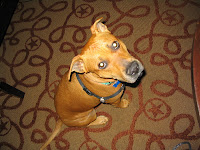 This is Mamas. We decided rather than walking in the afternoon, we would take her into town with us. This is encouraged by the staff to get the dogs used to cars and other people. Mamas has only been at Best Friends for a couple of months. She was seized in a dog fighting ring in California - they think she was used for breeding. What a nice girl. We went back to the hotel and she jumped up on one of the beds and rolled around in the pillows. Then she was sitting next to me and saw herself in the mirror on the wall - and growled at herself. I tried to reassure her, but she needed to let that other dog know she was serious. Only other quirk - she doesn't like riding in the back seat of the car - she had to ride in the front seat on Cathy's lap.