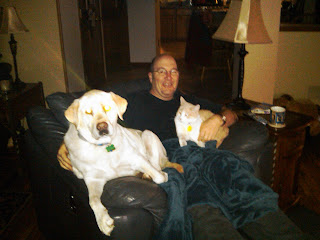 This is Douglas the kitty in his foster home with Ava the dog and Steve the dad. Douglas was rescued by CAHS CID officers. A lady had cats locked in dog crates in her backyard covered by tarps.
Anyhow, Douglas is about 5 years old and a true velcro boy. He was slated to move to a barn, but seemed too much like a house cat. So I convinced Nancy (married to Steve) to take him as a foster while we find him a permanent home (looks like he is home to me, but we will see).
Douglas and Ava have become friends in less than a few days. Nancy told me the other day that they were sharing an open window as she was leaving to volunteer. In this shot, Ava has crawled up in the chair with Steve, which is something she has done since she was a puppy. Douglas climbed up there too and Steve called Nancy to get a picture.
Posted by Random Felines at 1:21 PM