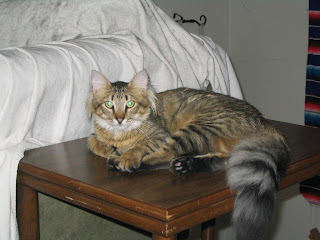 I am going to try to get a paragraph or two up about each of the current crew.
This is Spud. The daughter of a neighbor of my parents found him last fall in a box outside of the daycare where she was working. After a couple of days she realized kittens are a lot of work and called to see if I would take him and get him big enough for the shelter. With everything she said, I was sure he was a bottle baby. Nope - ends up he was about 6 weeks old at the time.
I brought him home - at the same time I had Ivy and her mommy and sisters. My main concern was getting him FIV/FeLV tested. I managed to get a last minute appointment with Banfield. They took him in the back to draw blood and the vet came back out with this tiny red kitten in one hand and the test in the other and a concerned look on his face. I panicked - I was sure the test was positive. Nope - seems the test wasn't done yet but the vet wanted to know if I would be upset if the kitten was male, not female as I had told them (really, I hadn't looked too close). I told the vet I didn't care if the kitten was a puppy so long as the test was negative.
Turns out it was, and a year later, he is still living with me. He bonded with the group of kittens and when Ivy came back to stay, I couldn't part with him. You can't tell really well in the picture, but he is more red than brown and has the LONGEST fuzz coming out of his ears. He is OK with people, but very comfortable with the cats. In fact, I call him the "stalker boy" as he has no sense of personal space - if Tim or Tom lays down, he is right there - right up next to them. I have seen him pull the same move on Ivy who usually doesn't mind. Mozart and Maestro make him move or get up and leave.
Posted by Random Felines at 3:08 PM