One of the TNR trappers for the rescue reached out to mom about a single kitten she had found. Since Gordon needs a kitty friend, mom offered to take him.

Well, turns out the new guy is about half the size of Gordon. But he is fiesty so that helps. Gordon spent the first part of the introduction treating him like a cat toy. By Thursday morning, they were getting along better. The new guy is named Carsen after the daughter of the volunteer. He needs some work but hopefully as he puts on some weight he will start kicking Gordon's butt. 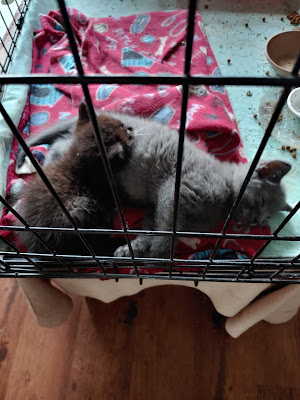