I always tell applicants and new adopters from the rescue that we recommend annual wellness visits for every animal. Beyond vaccines and any recommended blood work, cats should be seen just to make sure they are doing well and that there have been no changes in the previous 12 months. I think what people forget is that cats are prey animals as well as predators and that means they tend to hide symptoms of illness until the last minute - sometimes when it is too late to do anything about it.

Since I want to practice what I preach, I set appointments for the girls for this week. Here's my caveat with this - Junior does not go every year. However, he is my "house feral" and it is more stressful for both of us to catch him, transport him, and handle him. In fact he has to be sedated to be handled by the vet. It is just too hard on him. He did get a dental about 18 months ago and was fully vaccinated at that point. So I joke to the vet that he will be vaccinated every 6 years whether he needs it or not (maybe....).

I did have an applicant that had very little vet history for one cat - I asked and she explained a situation similar to Junior - I completely understand and she was approved.

The tricky part of this was going to be Goldfish. I know how skittish she is and that catching her and putting her in a carrier could be a tough prospect. In anticipation of that, I put a half dose of gabapentin into some food and put it out for her. She did eat it and was spacey enough I could almost pick her up. I figured with a full dose we would be fine. Except I think she was on to me by that time - I put out the canned food on Monday and she wouldn't touch it. About 10 minutes before I had to leave I thought to try it the hard way and just grab and she was all kinds of NOPE. I gave up at that point to stop stressing her out. Of course, then Chanel was worked up so I managed to grab Ivy and Daiquiri (who were actually scheduled for Wednesday) and took them instead.

Daiquiri is doing well. Same weight as always, got her vaccine and probably needs her teeth cleaned at some point. 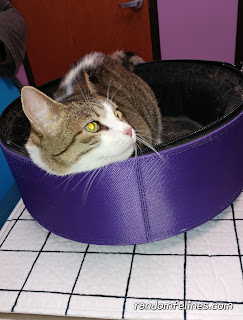 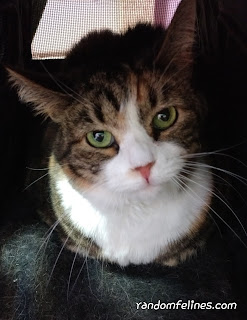 Ivy however is another story. She wasn't due for vaccines and had a full blood work up last year that was fine. However, she has lost about 3 pounds. Which is a big concern. The vet found that her teeth are terrible and that is most likely the cause of her weight loss (though it was mentioned she could stand to lose another pound - which would put her at about 9.5 pounds total). Next step is to schedule her a dental and see how bad it is for her. The vet said she sees some stomatitis, so it is pretty likely the old lady cat is going to lose some teeth.

As for Goldfish, I am moving on to another plan and will try to get her to the vet in the spring. She may be OK or she may end up being like Junior and going when necessary. I do at least want to get one more round of vaccines in her beyond her current kitten set however. I've gotten a few comments online about just "putting her in the carrier". She really does need the gabapentin - without it she will be way too stressed. I won't do that to her or to my vet. I have friends who use it very successfully and I used to use it with Mozart since he would try to bite the vet. It is short lasting so there is no harm but definitely benefits to using it.

Chanel went on Wednesday. She was her normal self and seems to enjoy the vet and running around the room. She had lost a pound from last year as of this spring when she was in for her foot. Well - she gained it back plus a little more. Our bouncing tuxedo girl weighs 10 pounds 10 ounces (and now outweighs her sister Cupcake). And...her teeth are bad too. I suspected as much as Cupcake had to have hers cleaned last year. 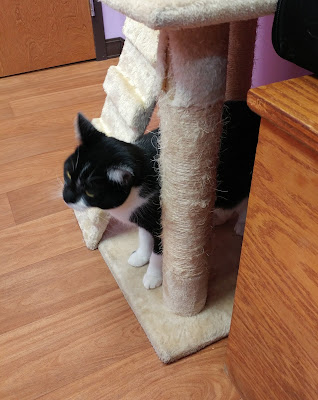 Which means 2020 will be the year of the dental cleanings. Ivy first, and then probably Chanel then Ivy. Ugh....someone besides me needs to get a job around here.
Posted by Random Felines at 6:30 AM