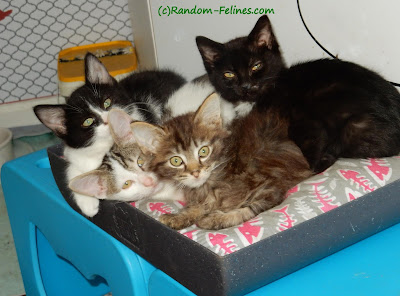 The kittens are doing well. Gargoyle and Selkie are probably big enough for surgery, so we will try to get that scheduled for next week (after the holiday). Dragon and Wyvern are still kind of little so they will be around for a while. Dragon occasionally sneezes and Wyvern wasn't eating as much as he should have for a few days but they both seem to be much better now. Wyvern is even out more and playing which is a great sign.

We have had some changes around here. Mom ended up having to look for a new job. She started last week and it has been an interesting change. The drive is a little longer for her. It is similar to her previous job but she is having to learn a lot of new rules and software so her brain had melted by Friday.

She no longer will have access to the internet at work, so she won't be able to do rescue work at work and also won't be able to post or comment during the day. With the job and rescue work, she may not be able to comment as much on your blogs for the short term. Please know we will be thinking about all of you.

That said, with the US holiday on Thursday, mom is going to take this week off from blogging after today so she can try to get more things figured out on her schedule.
Posted by Random Felines at 6:30 AM