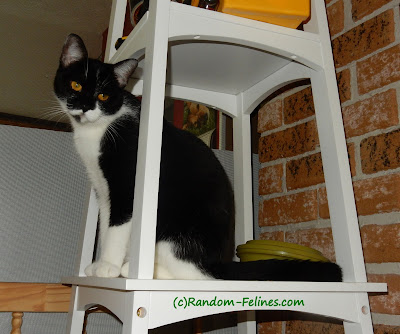 Chanel was due for her annual check up and rabies vaccine. Our vet doesn't like to do both at the same time, so we will stop back in about 3 weeks to get her FVRCP.

She had a few complaints in the car, but that is mom's fault for not doing any outings recently. But Chanel was as good as normal in the car and at the vet. Mom lets her out right away in the exam room as Chanel likes to wander around and check out the place.

She currently weighs 9 pounds 14 ounces (yikes - almost 10 pounds). Mom asked though and the vet says Chanel is in good body condition and her weight is fine. Chanel does have some gingivitis...which didn't surprise mom since Chanel's sister Cupcake just had a dental cleaning due to the same thing. So at some point this fall (hopefully), both Chanel and Daiquiri will need to get a dental cleaning. Otherwise, Chanel was well behaved and got a good report. It is always interesting to see her in a different environment. The vet did give her a treat on the mat on the table and Chanel completely missed it, so the vet took a look "deep into her eyes". MOL Dr F said everything looks good, so it may just be Chanel missed it or could be attributable to her fever as a kitten. Once again - just adds to her charm. 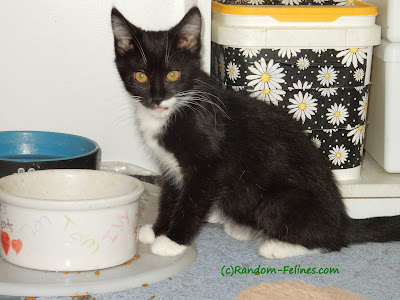 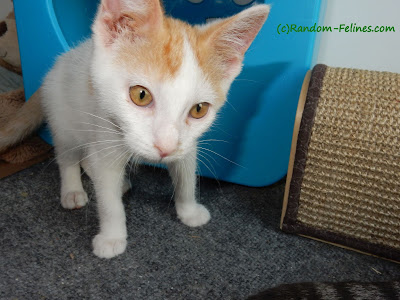 In other news, Goldfish needed to be tested and Annatto needed to be retested. Goldfish had previously given the rescue vet a run for her money, so mom asked if our favorite vet tech A would help out. Mom jokingly calls A the "Queen of the Tiny Vein". A agreed so the kittens went with mom and Chanel and mom took tests from the rescue. Well A and mom are used to the other variety of tests so they had a few minutes trying to figure out how the test worked. Once they got that down, blood was drawn and the tests had to sit for 10 minutes. Annatto was charming and Goldfish squirmed some but didn't put up too much of a fuss.

10 minutes later....both kittens are officially FIV and FeLV negative. If you have been following along, we had been told by the person who surrendered Annatto that he had tested positive for FIV. The nice part about kittens is that they can convert the serotype of the virus - or as we say in rescue, they can throw it. He has and while he would have been adoptable as an FIV+ kitten, he will be that much more adoptable now. Both kittens are scheduled for spay/neuter on Friday.
Posted by Random Felines at 6:30 AM