Living with a semi feral cat

**a post by the mom
First a little background. Eight years ago now, a neighbor and I spotted some kittens and decided to do some TNR in our neighborhood. The first set of kittens were smaller and socialized really well and were adopted through a local shelter. Shortly after that we caught a slightly older kitten. 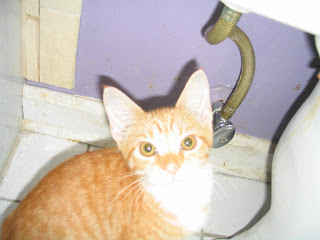 Once we had him, I didn't have the heart to let him go back outside. Unfortunately, he was about 3 months old which is about the outside edge of being able to socialize kittens. I will also say that I didn't know as much then as I do now. The downside to my decision is that I have what I term a "semi-feral" cat living in my house. He has been here since we caught him. He has been seen by a vet twice since I can't catch him easily or without stressing him out. He lives a good life and is good with kittens and the other cats that live here (mostly - he has some stalker tendencies with Ivy). But he won't come near me. Recently he has gotten up on the bed every once in a while at night when I am reading and will lay at the very edge, but that is as close as he is willing to get. But if I move - he is gone.

Don't get me wrong - I am a proponent of annual check ups for all pets. However, in Junior's case, it is more stressful to try catch him. However, a few months ago I noticed he seemed to be having some mouth pain when he yawned or ate something. I had to decide....let it go and hope it wasn't serious and knowing he was uncomfortable, or set an appointment for a dental and catch him. 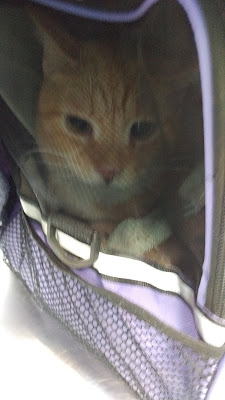 Busted and headed to the vet
I am very lucky that the tech at my vet's office is also a friend. We talked about it a couple of times and I set an appointment.

However, how do you catch a cat that is afraid of people? I went through a couple of plans in my head. The other thing we had spoken about was trying to get gabapentin into him before bringing him to the office. After some thought, I decided to try to live trap him in one of the bedrooms. I could mix the meds in the food and have a safe way to move him. Plus once we got to the vet, the trap could be set up on one end to be able to sedate him with an injection.

Junior had other plans. Tuesday morning I locked the girls in the back bedroom, herded him into my bedroom and set the trap. After over an hour....nothing. I was now down to 45 minutes before I had to be to the vet. I moved the trap to the bathroom. However, once he got out the bedroom (and I shut the door behind him to limit his space), he freaked out. He bounced around the living room and would not head where I wanted him to go. I knew if I didn't catch him, he wasn't getting to the vet and moreover it would be months before I would even be able to try this again.

Finally he wedged himself behind a pillow on the sofa. It was now or never. I put one of the soft carriers on the chair and grabbed a towel. I threw it over him and wrapped him as much as I could then shoved him into the carrier. It wasn't elegant, but it seemed to work. I locked the zippers on the carrier, threw a towel over the top of the carrier and headed off.

The nice part about the mesh on the carrier is they were able to sedate him by injection right through the mesh - I hadn't thought about that but it was brilliant. He finally dozed off and they got him set up for surgery. I did get a chance to pet him a little and also get a look at his teeth.

I will admit, I did fear that we would find something really bad....up to a possible mass in his mouth. They clipped his nails and he had a full bloodwork panel done along with getting a rabies shot. The bloodwork came back excellent. However, he ended up losing 9 teeth. They could have done more but wanted to not take everything now. I joked with the tech that with a 3 years rabies shot, we would be back then. 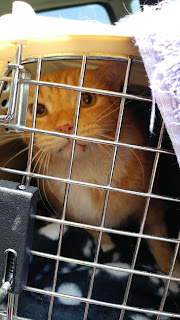 The only thing that overcomes ignorance is education. I've learned a lot in 8 years. Would I make the same decision today that I made then? I honestly don't know. While he may be afraid of people, showing his feral birth, I know he has lived a much safer life inside. Right now, he seems to be doing OK. There has been canned food left out and while I think Daiquiri is eating most of it, he is eating. He REALLY does dislike me now though - I so much as breathe in his direction and he disappears. Hopefully that will taper off (or at least back to his normal) after a while.
Posted by Random Felines at 6:30 AM

Email ThisBlogThis!Share to TwitterShare to FacebookShare to Pinterest
Labels: a post from the mom, feral cats, Junior