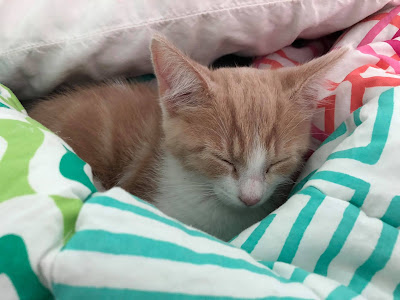 A few weeks ago we were contacted online about a possible family for Sparta. Mom actually took him and Argos over to meet the family. They have a small dog and an older female cat. And 2 kids. The new kitten was to be a gift for the younger daughter.

For her birthday this past week, her mom and dad put a note in a box with his picture and gave it to her letting her know that the final decision had been made and they were getting the kitten this weekend. (they had previously told her that the decision was up to our mom)

Arrangements were made and Sparta was handed off to his new family this past Saturday. The daughter apparently was up at 4:30am she was so excited. Mom has gotten several pictures - including the one above - over the weekend and it looks like he has settled right in to his new home. No report on the dog situation, but the older cat is giving him a wide berth so far. MOL
Posted by Random Felines at 6:30 AM