Remember these guys from last summer? 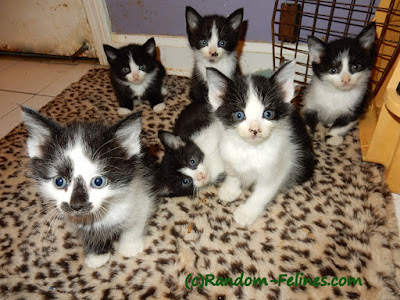 Rooney from the #RatPackKittens was adopted by a very nice couple that have sent a couple of updates and emailed mom last week with another one that they were happy to let us share with you. They renamed him Ragnar. He and his siblings are about 9 1/2 months old now for reference. Rooney was one of the boys that lost an eye to infection as well.
~~~~~~~~~~~~~ 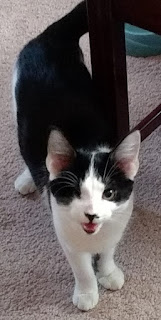 It's been a while so I thought I'd give you an update on how Ragnar (aka Rooney) is doing. I can't believe we've only had him for four months! It feels like a lot longer. 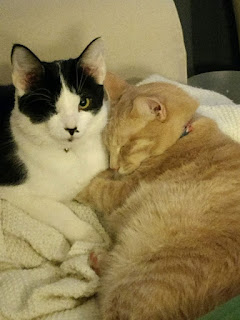 He's still such a happy, affectionate and silly kitten. We took in a friend's cat because she was living in a bad neighborhood and had to get out but couldn't take her cat to her new home. His name is The Dean, and he and Ragnar are inseparable. They are constantly snuggling, cleaning each other, wrestling or causing trouble. Our other cat Fergus is pretty happy about this situation because he's a grumpy old man and wants to be left alone. 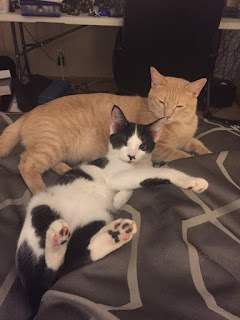 Ragnar loves:
-Belly rubs
-Chasing his tail
-Snuggling on mom's chest while she's watching tv
-Meeting new people and demanding attention
-Sleeping on mom's face in the middle of the night
-Any and all food
-Climbing to the top of the cat tree and then yelling for mom to come look and be proud of him

Ragnar hates:
-Not being fed 24/7
-Vacuum cleaners
-Anyone but him getting attention
-Mom or dad taking showers. I'm pretty sure he thinks we're in danger and tries to save us by yelling
-Going out in the snow (we tried it once, he cried the whole 30 seconds he was outside)

Thanks for being so willing to take in kittens and help raise them. We really appreciate that you took such good care of our Ragnar until he came home to us. I've been following your blog and I know this work can be hard and heartbreaking. I'll try to keep sending you updates on how Ragnar is doing.

P.S. He still hasn't grown into his ears, haha
~~~~~~~~~~~~
Ears or his feet.  :)  He is going to be a big boy if he is going to grow into those things. THANK YOU to Ragnar's mom and dad for the updates....we love hearing how our former fosters are adjusting. Sounds like he is one very happy boy.
Posted by Random Felines at 6:30 AM