There was a local Petsmart opening this past weekend and mom decided to take Chanel out. It is still very cold here so mom made a quick run from the car to the store with Chanel. We actually saw another kitty in the store as well as adoptable kitties from 3 different rescues - including Colony. There were give aways - including cat ears. There were coupons also so mom got a bag of food for Allie along with some treats for us and a new ESS scratcher. 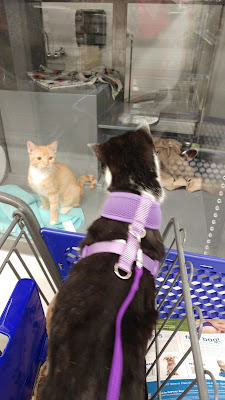 That orange kitty is Pumkpkin who was available with the rescue. She was actually adopted and went home Saturday evening. 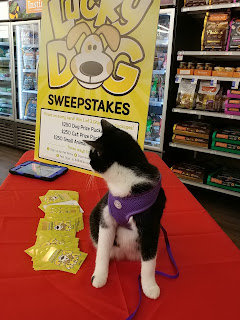 Chanel was a big hit as always. People were surprised to see her and she got lots of attention. Thankfully she rides in the cart so she was only seen by a couple of dogs.

Mom did get a surprise at one point. There was a cricket on the floor as mom was talking to a store clerk. The clerk grabbed the cricket and put it back in the container. Chanel however had already caught sight of it but didn't see it leave. She launched herself OUT OF THE CART and landed on the floor (have we mentioned her nickname is Crash?). No harm done but she did spend a bit of time looking for the missing bug. Mom does make sure she always has a grip on the leash, so other than going over the side, Chanel wasn't going too far after that. But mom certainly got a shock since Chanel has never done anything like that before.
Posted by Random Felines at 6:30 AM