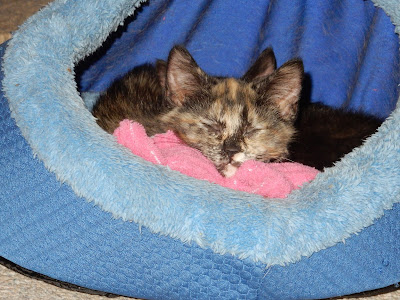 you recognize this face right?
Isadora Calais of the French city kittens

Well, her mom sent our mom a message the other day and we thought we would share the exchange cause it completely made mom laugh.

D: Just so you know I just had to chase your foster child around the house to get the slice of Swiss cheese she stole off my sandwich

M: Hahaha....thanks for the laugh. She may have gotten cheese head lessons from Tommy. Did you let her have some at least?

D: Yes. I'm a total sucker. She's been stealing animal crackers for a while. I turned my back to put the knife away (she has no fear so I can't put a knife down anywhere) and when I turned back she and she cheese were gone. Under the table, down the hall into the living room. She managed to eat a quarter of it on the run. She's amazing!

M: And maybe some "brat" lessons from Daiquiri. Tommy stalks me when I'm eating cereal or ice cream. He is a total dairy hound.

D: Who taught her the love of water? OMC she loves water! She's been in the shower with me twice. I have to be careful as she doesn't seem to notice if it's hot water.

D: She's in the sink. Not content to supervise. The first time in the shower I had a head and hands full of shampoo and my eyes closed. She couldn't get out and I couldn't help her. I was crying and she was terrified. She was still very tiny then. She was scared off the shower for a few weeks but it now back to trying to get in with me. If I don't lock her out it takes three times as long to shower while I battle her. She's hilarious!

Apparently the tiny tortie also talks to herself as she walks around the house. She has her brothers under her paws and has made herself right at home. That's our girl.....
Posted by Random Felines at 6:30 AM