Mom went to BarkWorld in Atlanta Thursday to Saturday. We didn't go - we have a travel embargo in place. MOL And since mom was flying, no kittens went this time either. Since we weren't there, we are going to let mom take this post.
~~~~~~~~
As with most conferences like this, there was good and bad.

The bad:
The good: 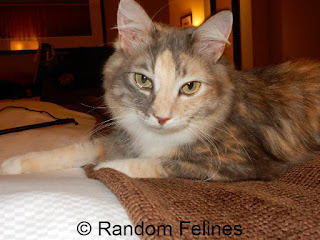 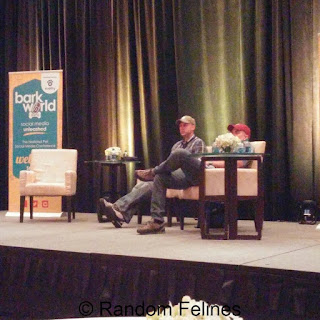 Tom and Shaun from Canopy Cat Rescue waiting to start their speech
These guys were great. They were very prepared and are so passionate about what they do. There was a limited number of people invited to speak with them after their speech and they are just nice guys. For them, everything about what they do is rescuing cats. It was asked about the show that was on for a short time. Without getting into specifics, it was pretty clear that TV was getting into the way of rescue and they parted ways. Their passion is so evident and it was a thrill to hear them and speak with them. 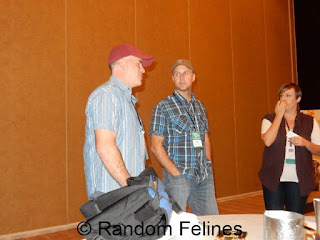 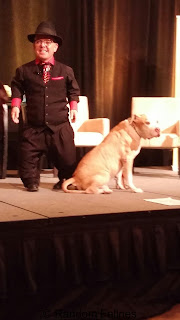 Shorty Rossi was there with his dog Hercules. He was funny and again VERY passionate. He spoke at length about getting educated before making statements on social media. And then getting involved and being passionate. It was interesting to hear how far he has come in life and how he is so dedicated to pitties and BSL and making changes for the breed. 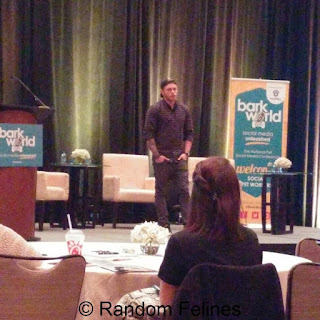 Gus Kenworthy is the Olympic skier who went viral in Sochi for taking a stand for the dogs that were seen roaming the streets. He brought back a mom dog and 4 puppies. It was interesting to hear his story, but it was evident that public speaking is not his thing...

Sessions:
There were sessions about branding and writing. The big picture message that I got out of the sessions that I went to was to be genuine, be passionate, be honest, be educated and be yourself.

Exhibits:
They weren't giving out much stuff. HALO was there and was donating a meal to shelters for taking a picture with their sign and posting it. I don't put my picture out there much, but for that I was on board. There was a couple of app companies there that I need to look into more and will talk about some other time. But again, mostly dog oriented.

Overall:
As much as I loved getting out of town and seeing some friends, I don't think I will go again. I LOVED meeting the Canopy cat guys. But honestly, it was exhausting dealing with being one of very few cat people. Brands were sure what to do with us. There were a couple of dog owners I wanted to seriously slap. The total lack of professionalism when it came to running things on time and keeping people informed of changes drives me nuts.
Posted by Random Felines at 6:30 AM

Email ThisBlogThis!Share to TwitterShare to FacebookShare to Pinterest
Labels: barkworld