Mom intended to go to an adoption event on Saturday. However, they were short help at the adoption center and she ended up staying there to help. 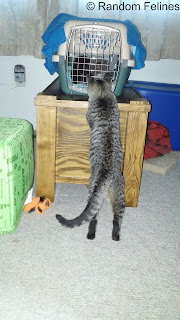 She came home with a carrier.....Tostada couldn't wait to check it out. 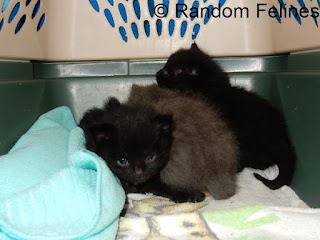 However, there was a great adoption story.

Corrine has been with the rescue for 2 years - she was found as a stray, already spayed. The parents of a friend of a volunteer were in town from Michigan for the weekend. Their son had adopted from the rescue before. They wanted to adopt and wanted to do it from our rescue.

They looked around for a while and ended up over in the intake side (normally not where people are allowed but the exception was made in this case). And they met Corrine....she was sitting on a table and reached out and touched D on the sleeve. His wife B came over and they fell in love. This was their new kitty. They did the paperwork and asked mom if they could pick up Corrine on Sunday morning on their way home. No problem.

Lesson note: when this happens in the future, put the cat in a crate overnight.

Mom and the family showed up Sunday morning. And spent over an hour looking for Corrine. Nothing - she was no where to be found. Mom kept apologizing and the family was great about it. D and B are retired, so they decided to stay one more night and everyone traded information. Mom promised they would keep looking.

Mom had to leave to clean cages at one of the remote locations. As she was getting ready to leave, she got a text "They found Corrine, she is in a crate now".

Mom called D and they agreed to meet again and send Corrine home. Mom asked the volunteers. Apparently they walked to the front of the intake space, came back and Corrine was just sitting on the table. No clue where she had been hiding. Mom got her packed up and she was on her way to the good life.

PS: Mom got a text later in the afternoon from D and B's daughter. She said her parents decided to rename her Rosebud and promised that she will be loved and spoiled rotten. Restores mom faith in humanity....
Posted by Random Felines at 6:30 AM