so much for that plan

Mom had great plans for the weekend....3 days off (more or less after events and errands) to get posts ready to go. But you've heard what they say about "best laid plans" and all that right?? 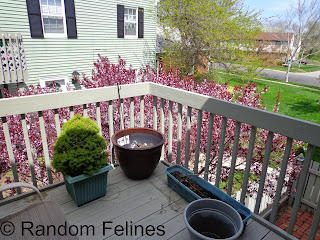 This is our balcony. We live in a condo but on the second floor. That pot in the corner now contains that evergreen shrub. Sunday morning mom ran out to grab a few things and bought some mums to plant in the other two planters. Sunday evening (about 7:30pm), she went outside to plant them. As she was doing that, she noticed the evergreen seemed rootbound and so took her garden rake and tried to move some dirt around when.....

A swarm of angry bees came right out of the dirt and right at her. She was screaming and flailing around and trying to get back into the house. One got her nose and a few got up her shirt and a few even got in the house. She had to grab Daiquiri to keep her from trying to catch the evil winged bugs! Mom smashed the ones that came inside and then stood there elebenty kinds of freaked out.

Just to be safe, she took herself to the people emergency stabby place. They gave her some drugs but said she wasn't having an allergic reaction (which we understand could have been very bad). They said it was smart for her to have come in though - better safe than sorry. Of course, the stabby people said they wouldn't let her go home on her own, so she was texting friends trying to see who wanted to have some fun with her on a Sunday night. Miss Karen came over and helped mom plot her escape from the stabby people. Only took them 4 hours to figure it out.

Tuesday night she took a can of bug killer out and sprayed the heck out of the dirt around the bush. Unfortunately she saw some evil bees still flying around yesterday morning, so she is going to have to try again.

Mom ended up getting stung about 10-12 times. She was pretty miserable on Monday and Tuesday....we did our best to keep her company and entertained. Though she did scream pretty loud when that fly went by her on Monday night. Thankfully she is feeling much better....though still kind of itchy.

Also - sorry we haven't been able to comment this week. While we should have been able to read and comment more, the mom was layin' around moaning about being itchy. whine whine whine.....

**on a more serious note, I am fine. Still kind of swollen in a couple of places, but otherwise ok (mostly - I kind of feel like I went on a 3 day bender and still have the hangover). But as a note to everyone out there....PLEASE be careful. I had NO idea those bees where there and they were mean little buggers. While no one wants medical bills, better safe was the way to go.
Posted by Random Felines at 6:30 AM

Email ThisBlogThis!Share to TwitterShare to FacebookShare to Pinterest
Labels: bees