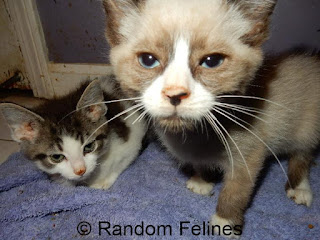 Tamarind and Tumeric were both adopted last week!!! (not together, but still) Since mom doesn't do the adoptions at the center, we don't know anything about this new families, but we wish them good luck!!

Nashville and London are now both on Petfinder. Mom is reluctant to send London to the adoption center just to avoid him getting snotty again....we shall see. However, we suspect just getting him up on Petfinder will get him a home. :)

Speaking of snot, Tostada is back with us for a little bit. She had gotten pretty sick right after going to the adoption center. Then she came back out to the adoption floor, got sick, came back out, got sick.... notice a pattern??  Anyhow, she was on the adoption floor on Friday when mom stopped by and when mom got her out, she noticed Tostada seems kind of wheezy. Rather than put her back, mom said she could come to our house in the hopes she would recover a little better. For now she is in the tower so mom can catch her to medicate her. We don't care but she has been growled at several times by Topeka and Nashville.

Mom will be at an event tomorrow night and plans to take London. After last weekend, he appears to be pretty bomb proof. :) 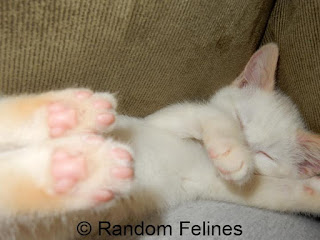