A couple of weeks ago mom got an email from a client at her office asking about some feral cats by this lady's house. While mom doesn't try to get personal with clients, it happens some times and she really likes this family. Their boys have some serious medical issues and mom tries to help as much as she can. So when T sent the email about cats and kittens she was seeing, mom reached out to the rescue about getting some TNR done. Mom has our one trap, but we know that if there is a whole colony of cats, it is better to try to trap as many at the same time so they don't get wise to the traps.

Mom had spoken to the head lady of the rescue and made it clear if there were little kittens, they could come here. As hard as it is, there does have to be a point where cats have to be released. There are some older kittens, but they will go back to the colony. Sometimes you can socialize those kittens, but it takes a lot of time and there just aren't the resources. However, the little ones can't be fixed and can be socialized pretty quickly.

Thursday afternoon she was texted that they had two little kittens (they thought there was 3). The office closed early on Thursday and mom got the 2 kittens to the rescue vet to get them tested. And they are....negative!! Woohoo!! Mom brought them home and got them set up in the play pen in what used to be our dining room. One boy and one girl. The boy was a little hissy, but they were mostly just scared.

Thursday evening mom was called by the man doing the trapping that he had the third kitten. Alright!! So mom drove back across town and got the kitten. This one was hissing and spitting and altogether ticked off. Mom checked - it's a boy - and put him in with his siblings. And as with the alcohol kittens, canned food works wonders. By Saturday afternoon they were coming to greet mom at the door to the playpen and the hissy boy was coming out when mom was sitting there and rolling over right next to her. He is going to be a lover boy. :)  They are a little aggressive about food right now, but once they realize that they will continue to be fed, that will decline. In the meantime, mom will admit that growling kittens (they all weigh about a pound) are kind of cute.

They will be with us about a month or so while they get social and get bigger. Morocco finds them interesting but doesn't show any desire to be a mom again. She is being spayed today and will go to an adoption window as soon as one is available. Cairo and London find them interesting - in a "hey look they got canned food and we might like to nom those kittens" kind of way.

Mom is allowing the boys to name the kittens, so we will keep you posted on that. As for the TNR, we have the older kittens (2), three tomcats and one of the mom cats so far. 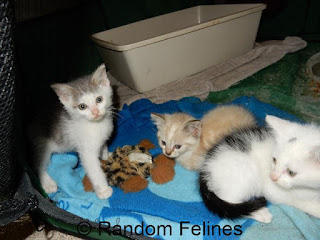 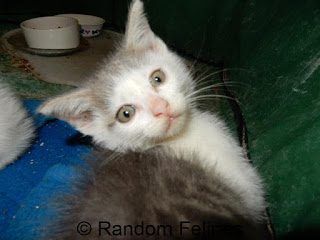 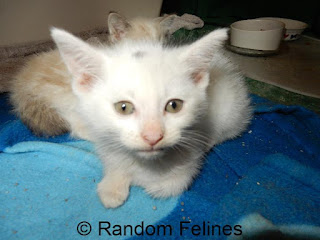 our no longer hissy boy