Well there is a holiday we can celebrate!!! 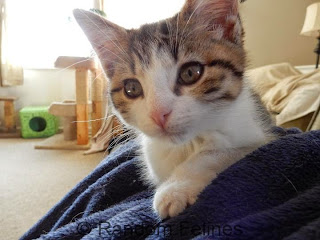 
But did you know that kittens - especially tiny kittens - are the most often killed in shelters?

If Daiquiri had not been found by rescue where mom volunteers, she wouldn't have had a chance. She was 2 weeks old and in need of round the clock care (we were lucky that Cass was willing to take another surrogate kitten).

Most shelters won't take kittens that don't have a mom or aren't eating on their own. There just aren't the resources to foster and support tiny kittens. Beyond that, these tiny kittens are sensitive to just about everything they are exposed too - and too young to be vaccinated. They have to be kept warm and fed about every two hours until they start eating on their own.

Best Friends Animal Society is trying to change that. They have an agreement with the City of Los Angeles to help with rescue. According to their numbers, 61% of animals killed in LA in 2014 were kittens. To make a change, they are trying to add more space to their current kitten nursery, but they need some help. Their new campaign and fundraiser is to #SaveTheKittens and you can help them here. Best Friends estimates that the additional space could save more than 4,400 tiny lives.

OK - we know what you are saying....you don't live in LA, so what does this have to do with you? Just think...if LA can get to a point where they can save these lives, isn't that an example for the rest of the country?? Heaven knows it isn't cheap to set a safe space set up with all the things kittens need - food, shelter, toys and love. But thank goodness for lots of volunteers ...and don't get us started on clean up and laundry. MOL

Best Friends in Utah located in Salt Lake City is already making strides. They have a nursery and take these tiny kittens from other shelters. According to their webpage, in 2014, the nursery saved 1,372 kittens. Pretty amazing right?? 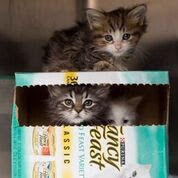 In the LA nursery, there are generally about 150 kitten in residence at a time. Mom thinks the cute could be deadly...


**We were asked to participate in this campaign by Best Friends. We were not compensated, but even if we were, we only talk about stuff we believe in and can stand up for. And hey...kittens!!
Posted by Random Felines at 5:30 AM