Mom made it back from Tennessee. She said it is nice to see family but it is nice to get home too. We are behind on blogging and commenting....she didn't take the laptop. We are trying to catch up.  :)

A bit of business first: The Swiss Cats asked about Petco. It is a national chain of pet stores. They don't sell animals (other than fish and mice) and have cages set up for local rescues. We have several stores....the applications are reviewed by the rescue volunteers and the adoptions are through the rescue not the store. :)

And we just realized we forgot to tell you news from before Christmas....Rosemary got ADOPTED!! She was adopted by a mom and daughter. They have a 4 year old kitty. We will let you know if we get updates!

We had a pretty quiet Christmas. The pet sitter came and went and otherwise it was just us. We were happy to see mom get home. 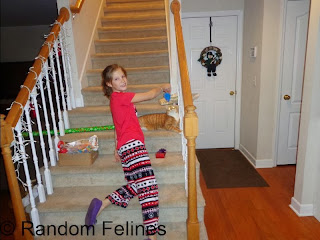 the kid playing with cousin Boots 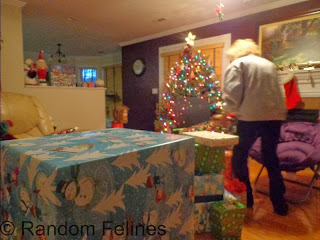 once everybody gets up, the kid sorts out the presents 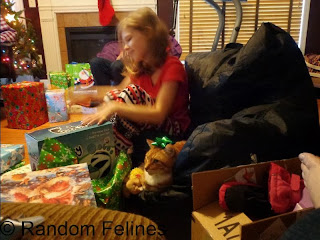 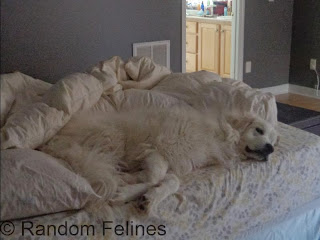 no, the polar bear is not supposed to be sleeping on the bed 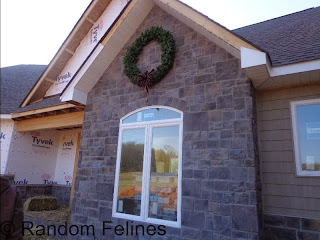 progress at Grandma and Grandpa's house 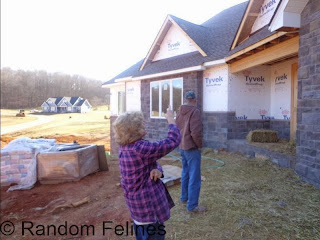 The stone on the outside it up. Some of the siding is up. There is primer on the walls inside and the tile guy was at work. The floors had started to go down but the discovered a problem with the way they line up, so they are going to have to pull up what was put down and then do it slower to check all the joints. They will start again on Monday and see how it goes....hopefully it won't slow everything down too much as they can't put in cabinets or anything else without the floors down.
Posted by Random Felines at 3:00 AM