Mom has asked and the CB is going to try to set up an auction to diffuse some of the cost for the medical care the gemstone kittens incurred along with their spay/neuters. Mom knew when the kittens came from Miss Chrystal in Illinois that she was responsible for them. She feels that way about all her fosters. But she never anticipated that they would get so sick - no one can....it happens more often than not - especially in rescue. No animal is allowed to suffer here.....so she got them to the vet. 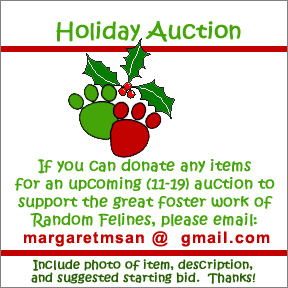 (THANK YOU Ann for the graphic.....mom is all choked up from the offers to help)

Now, Bourbon and Moonshine are most likely going to need dentals as well as their adult top canines grew in - but their baby teeth didn't fall out. So they have 4 top canine fangs....and inflamed gums....and dragon breath (stand back - it really is lethal). The rescue, like many others, is struggling. They took in a kitten that had to have her tail amputated due to abuse. And then October 31st they took in 2 black kittens that had been set on fire (yes, you did read that right). And they took the alcohol kittens and the gemstones kittens (that Miss Chrystal originally saved) as a favor to us.

So, if you have something you would like to donate, please see above for information. Mom says she hates asking for help, but she is going to have to bend her pride a little. It was hard for her to admit she needs help. But last night she was laying in bed.....Cory seems to be sliding backwards, Maestro has developed a strange limp, and Junior and Spud got into it - twice around 12:30am. We hate to tell people this, but mom was laying in bed and almost cried. It is hard to care so much and feel overwhelmed. So, THANKS
~~~~~~~~~~~

Tuesday was interesting.  We didn't get breakfast in a timely manner. The kitts and Cleo did, but not the rest of us. Then it happened....... 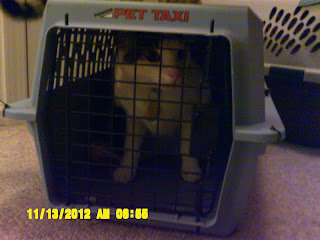 Tim was uncerimoniously grabbed and shoved in the PTU. He put up a good fight, but mom overpowered him. He started singing the warrior song and Tommy came over to check on him.


And then we got distracted by breakfast. (sorry Tim)

Mom hauled him off in the car and he was gone ALL DAY!!!

He came back moaning and groaning about a weird v-e-t and a hospital and dogs and funny smells. And he wasn't walking too straight either. 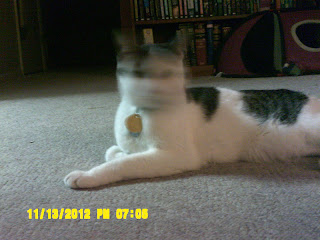 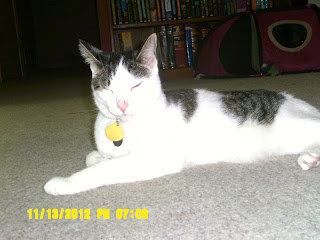 Mom said he needed his teeths cleaned. He did very well but did have to have a couple of molars in the back removed. He was ALL ABOUT the canned food when he got home - mom had to stand guard as the rest of us wanted it too!!! By morning he was pretty much back to normal. He is on an aunty-biotic for a few days....and put up a fight with mom that first night (mom has the wound to prove it....and his toenails were just trimmed too!).
Posted by Random Felines at 6:27 AM