Let's see - the triple threat boys from the bathroom got dropped off this morning for their neuter surgery. Not sure if they are staying at the shelter or not. Normally kittens come back to recover for a few days, but there is a big adoption event on Saturday, so they may stay. They have come out of their shells a whole lot more, but mom is concerned that taking them back to the shelter is going to spook them again. Poor boys....


Breaking news: there was almost an escape!!!! Mom had the boys in their carrier and was about 3 feet from the door to the shelter when.....the carrier broke. She had the handle and the bottom part hit the ground. One kitten shot out the back, one out the front and mom dropped the lid on third. She grabbed him and ran inside for help. The big gray one (red ball in his mouth) was the one in the carrier. The smaller gray had shot around the side of the building and was under a bench. Mom baby talked him and he came to her so she could grab him. She headed back inside and Miss Kelsey from the shelter went the other direction for the brown tabby. Seems he shot under a bush and was yelling that he didn't like it outside. sigh... After this, neutering will be easy for them. :)

However, they are staying since there is an adoption event on Saturday so mom is a little thankful. She put the alcohol kittens back in the bathroom this morning so they can have access to food all day and Tim can stay out of time-out when they are eating. :) Which will make Tim pretty thankful as well. MOL 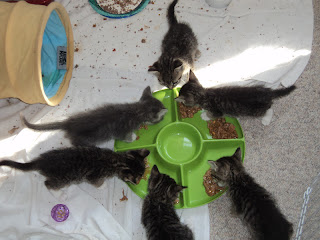 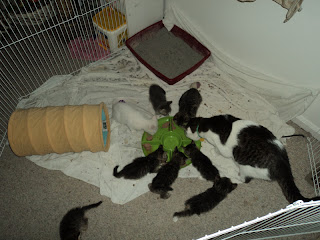 Mom got the idea for the tray from Robyn at love-and-hisses.
Works like a charm..... best investment of $1 ever....

There were a couple of questions about Doc from yesterday:
1. What color are his eyes? He is actually bi-colored - one blue and one green.
2. Aren't white cats normally deaf? Not always - but it is normally tied to blue eyes in white cats. So mom had presumed he might not be able to hear on that side. However, after some observation (that boy can sleep through anything), she is pretty convinced he is completely deaf and not just ignoring her. Miss Beckie though says she has some white cats with blue eyes that can hear and some with gold eyes that can't. So it may be more tied to the gene that makes cats white.
3. LP - we already have a Maestro - and he isn't very interested in the blinds. :) 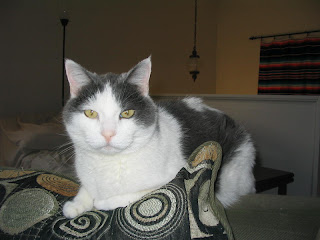 Mom says it is supposed to be a little cooler in the evenings and we might even get some much needed rain this weekend....maybe we will get some window whiffin in at night again!!
Posted by Random Felines at 8:47 AM

Email ThisBlogThis!Share to TwitterShare to FacebookShare to Pinterest
Labels: alcohol kittens, back to the shelter, deaf kitten, doc, Maestro