Hollie (at Petco - see Tuesday) is a tortie. Miss Beckie from the rescue called the store yesterday and she isn't hiding anymore and is coming out to greet people. Bobo is kind of whiny cause he is lonely. The plans to bring his brother over aren't going to pan out as his brother now has the snot. Poor baby...

Caramel went to see the v-e-t yesterday. The vet said that he was being undermedicated and that a higher dose of doxy should help. She was a little short with mom at first but did come around and realized that mom was doing what she was originally told. He weighs about 3.46 pounds now (holy moly) and should hopefully be sneaking up (silently) on his sister in about a week. :) 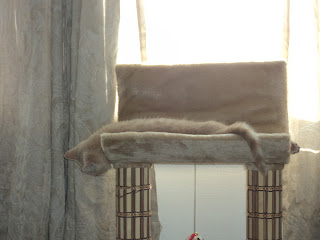 While at the v-e-t mom asked about Mocha - she asked if someone had a chance to look at the x-ray. A radiologist did look at it (no idea why no one called with a follow up). Turns out it isn't a birth defect (and in some good news, mom has been keeping track and it doesn't seem to curve in quite so far, so it does seem to be growing as she does). The x-ray showed 3 fractured ribs and lung contusions from a previous injury. Someone hurt this baby and caused that damage. We and mom are pretty angry..... mom would like to hunt that person down and kick them - though sadly, in this state, she would do more time in jail for that than the person would for hurting Mocha. At least now we know what happened and that she isn't going to suffer in the future. She did go with Caramel to the v-e-t this morning for "moral support"....she scratched mom and used some bad werds - we don't think that was very supportive. 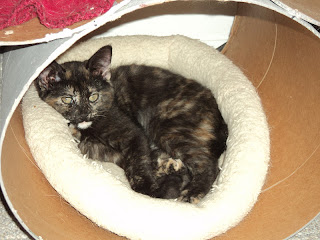 Finally, the weather was nice today. Mom took some time off from work for "mental health" and....she OPENED SOME WINDOWS!!! It isn't supposed to stay nice around here, but the fresh air was a nice break for February. 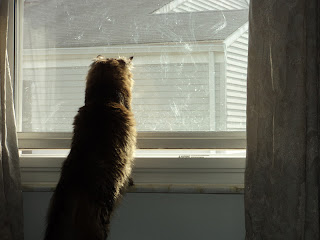