First, Ivy would like to thank all of you for your support yesterday....brothers can be so bad!!

Tuesday night mom picked up a new foster from the shelter. (as a reminder, yes, we still have the coffee kittens from the rescue, but since the shelter doesn't "like" the rescue, we keep the fact that we help both under the radar).

Martin is a 10 month old male black kitten. He is....ornery. And he bites. Oh, and mom has seen him launch himself across the room at a volunteer. She was afraid he was going to get a person from the public (or worse a kid) so she offered to take him and see if we could teach him some manners. Turns out he has already been in foster twice. But, he got an eye infection over the weekend, so they asked us on Monday if we would take him for a few days. 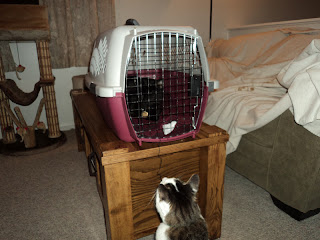 He was pretty growly and hissy on Tuesday - even at mom.

But she let him out for the first time last night....he and Tommy exchanged a few words, but otherwise, we think he was just happy to run around like a nut....he didn't stop for more than a few seconds at a time. 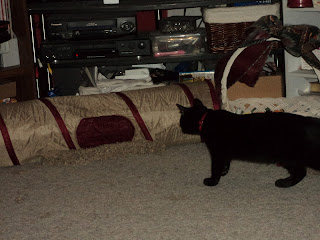 Mom isn't leaving him out during the day since she isn't home until she is sure he isn't going to start something to get himself in trouble. She says he is like a 2 year old kid - ornery when he doesn't get his own way.