THANK YOU for all the messages to mom yesterday. She is pretty frustrated by the whole thing. We know lots of you recommended a face to face meeting, but mom just isn't sure that is going to fix anything. This director lady seems to have her mind made up about mom....so she turned down the lead position and just plans to keep under the radar as much as possible. But we know the whole thing hurt her feelings and we cuddled with her to help her feel better.

She did have a transport on Sunday, but forgot to take pictures. It would have been pretty funny as she managed to get 4 medium airline crates in her Beetle!! She wasn't sure it was going to work at first - especially based on the sizes the sending rescue stated the crates were, but ends up the crates were a little smaller than stated. thank heaven....  and now 4 pups and one adult are safe in long term foster!!

The baking went....ok. Mom made oreo truffles suggested by Army of four. They turned out pretty well. But she also made 7 layer bars and isn't sure they turned out quite right - though she said they taste ok. :)

The foster monsters were out most of the weekend and up to no good. Last night Gigi didn't seem to be feeling well. She was much better for part of last week, but was moping about last night. And she is just still so bony. V-e-t appt on Thursday should hopefully tell us more.... 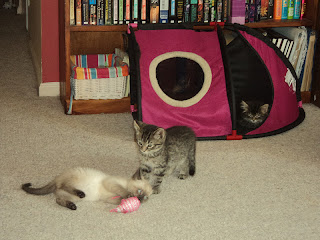 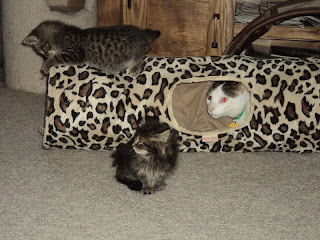 Posted by Random Felines at 9:16 AM