First, we are thankful for the lady that came to the shelter on Tuesday night and put aside her grief for her cat that died to adopt and save a life. And since she couldn't decide, she adopted 2 cats. And her son and daughter-in-law adopted the third that mom put in the room with them. Makes us wonder how many we could have gotten them to adopt???  MOL

Second, we are thankful for the dog walkers on Tuesday. A family came in and said that there was a cat in a nearby parking lot that was hurt. Did they bring it to us? NO!! Did they take some responsibility for finding the cat?? NO!!! However, despite these people, two dog walkers grabbed a crate and some towels and brought the kitty back. We don't know much about him or how bad he was hurt, but even if he had to be helped across the Bridge, he spent the night safe and warm....not outside and suffering.

Third, as always, we are thankful for mom and for the CB....no matter the good news or bad news, people step up to give a word of encouragement and that makes mom willing to keep going, no matter what....

Our grandma is having surgery on her hand today, so could you guys send some purrs and grrs in her direction? Mom is taking tomorrow off to play nurse - grandma doesn't react so well to the drugs, so she needs supervision. :)  Mom says that grandma's side of the family has parts where the warranties expire early and often. We aren't sure we get that, but it makes mom laugh when she says it.

OK, we are off to take a nap...being thankful is hard work!! 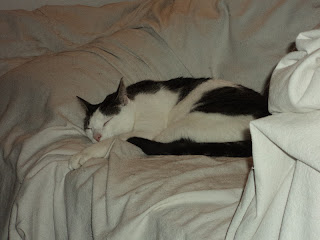 Posted by Random Felines at 9:15 AM