Good news: Bat went home last night!!! The family that adopted Mohawk came back for her.... the lady felt bad that Bat was left behind and her husband said "just go get her".  MOL She said Mohawk is doing very well - gives the dogs the halloween cat pose which they ignore. He is doing very well with Peanut, their cat with cerebellar hypoplasia. She said Peanut has fallen on Mohawk a couple of times and he just gets up and keeps on going. She has our email, so hopefully we will hear from them.

Daffy was adopted as well. But is appears that her microchip info got mixed up with Gizmo, so the facebook post said Gizmo was adopted with Simba (who Daffy was living with). So Daffy went home with Simba. Greta and Gizmo with go to Petsmart tonight (though Gizmo is now Daffy....confused yet??).

Mac is in the bathroom by himself. Mom is happy cause he is trashing the bathtub every night so he will have a little more space. Mom is having him neutered on Tuesday. We have put up posted and have him listed in a couple of places as "found" but mom isn't holding out much hope. So over the weekend she will start introducing him to the adults.

Mom was playing with the flashy box over the weekend trying to catch our whiskers. Spud and Ivy have some pretty spectacular whiskers and we hope you enjoy..... 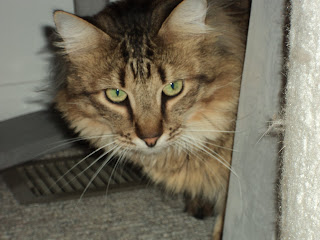 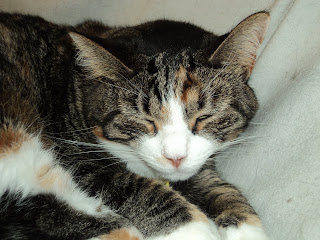