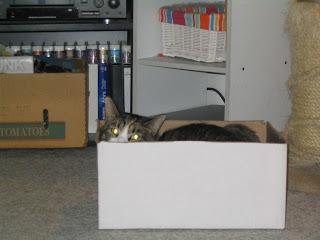 Some of you who have been following us for a while may remember mom's ongoing battle to trim Ivy's nails.

But not the Princess. She is BAD!!! She screams and swears and tries to bite. Even the vet techs are wary of her. Mom can'tdo it herself since Ivy as to be restrained and it takes 2 hands to trim nails. She has recruited help from friends. She tried a sedative. She was concerned about where this was going to lead. See, Ivy's nails grow really fast and really long. As of the other day you could hear her snicking on the carpet as she walked and she was getting stuck to things. Mom is concerned one day one of her nails will overgrow into a pad (and then Ivy would be really crabby).

Anyhow, mom tried something different on Sunday. She took a fleece and folded it into thirds and put it on the bathroom floor. She grabbed Ivy and wrapped her up in the blanket, being sure to cover the back feet and her head. Then mom laid on the floor, tucked Ivy under one arm, and ignoring the swearing (the girl knows some words that CANNOT be repeated), she managed to trim Ivy's nails. And no one got hurt!!