Mom called over there last night for the update. No replacement (YEAH!!). The doctor sewed up a torn something-or-other and cleaned it up some but said both joints look pretty good. Grandma was sleeping and grandpa was watching basketball. The doctor said she should be off the crutches next week, so it sounds like she should be better sooner than we thought.

Grandma called this morning and said she wasn't feeling great and not to call for a while since she was going to take a nap. Wish we could be there to keep you company. :) Since we can't, we have having Tim send you some smooches! 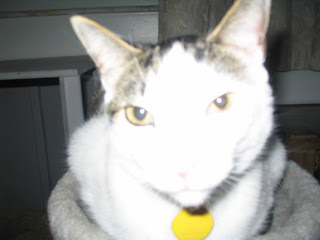 Posted by Random Felines at 9:24 AM