Took the kittens in this am for their FIV/FeLV test.  Apparently they are a new breed: bloodless kittens.  :)  Took a couple of tries on more than one kitten.  But we got them and should have the results tomorrow.

Phoenix and Java are scheduled to be neutered on Friday.  Then back to the adoption center.  Apparently the kittens are being adopted pretty quick.

This group doesn't seem to be eating much (which probably didn't help with the test this am).  So I stopped and got some canned kitten food.  And like a bunch of vultures, they attacked me as soon as the can was opened.  Phoenix was growling like a madman when I tried to move him.  Bet they weigh more now....

And for my favorite pic of the weekend - I caught Spud and Mo sleeping together.  Spud is actually getting friendlier....still jumpy but he has gotten up on my lap a couple of times (of course he was stalking Tim at the time, but that isn't the point). 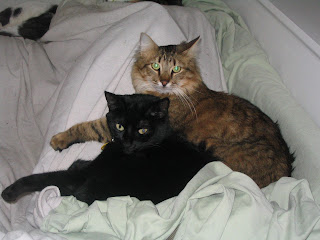 Posted by Random Felines at 3:30 PM