It's a miracle!!!  All the kittens got revaccinated on Wednesday and mom decided to weigh them at the same time to keep their records up to date.   And....everyone is over 2 pounds. (except Utah - but even she is up to 1.75 pounds)

We spent the weekend lounging around.... 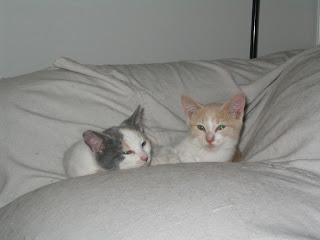 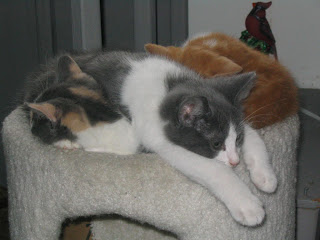 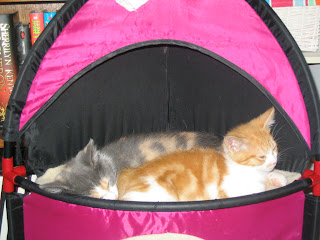 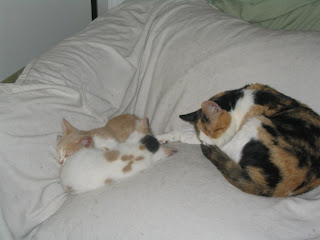 Maine, Carolina & Chiclet
Mom made the appointment to have the girls (again, except Utah) spayed on Wednesday.  She asked the clinic about Nevada having his surgery.  The lady on the phone said they usually wait - mom said she would rather do it now so he can get adopted sooner.  So he is going in with the girls.
Mom grabbed Maine and Utah to compare a few things on the tiny girl.  It appears that her head and body are about the same size as Maine.  However, from her elbow to her paw, she is significantly shorter.  Which we think must make her part munchkin.  Either way, she is seriously cute.
Chiclet is recovering VERY well.  You can't even see her incision site anymore and her furs are growing back.  Mom has caught her nursing the kittens occasionally and has had to break up the party.  Chiclet doesn't have any more milk, so they are just getting some comfort.  The upside is that Chiclet is putting on some weight now and you can't see her hips and spine anymore either.  Since mom won't let her sleep in the bathroom with the kittens, this is how she spends the nights.... 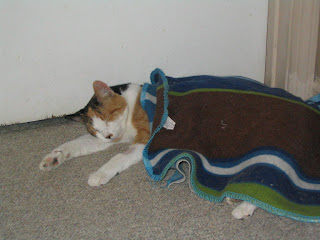 And one final thing....Nevada found a yellow fuzzy mouse the other day and spent several minutes trying to kill it.....