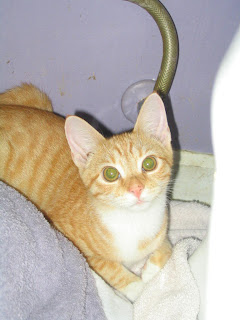 Getting his picture is a pain.  This is the cutest one I have so far.  He either looks mad or you can't see his face - his chin blends into his chest and it just looks odd.

He is making progress.  Last Friday I got out of work early and decided to run an experiment.  I put up the pen I have....

That requires some explanation: I bought a baby gate to use in the bathroom door so I could leave the door open - to get some air in and let everyone see each other.  Problem is that kittens can get over the gate pretty quickly.  So I got to thinking about rabbit pens.  A little expensive though.  I borrowed one and it worked GREAT!! So I decided to make the investment and found this one Dr Foster Smith.  It works great.  And once the kittens can get over THAT, then they deserve more freedom.

In Junior's case, it allows him a feeling of safety.  I know he could get over it - though I am not sure he knows that.  When I first put it up, the fosters were fascinated.  I heard a shuffling noise and went to investigate - the purple towel (you can see it in his picture) was moving across the floor.  I find that towel all over the bathroom.  He gets adopted, it will have to go with him.

Now he is sitting in the hall for a good part of the day.  He can interact with the kitten (I have seen he and Wally playing with his ball through the bars).  The adults seem more than ready to ignore him.  Hazel and Pistachio still have fits when they see him.  Stachi followed me into the bathroom this morning when I went back in to grab my rings and he actually charged at her hissing right back.  I kind of wanted to applaud.

He still is jumpy though.  He will be sitting in the hall but run back into the bathroom when I come down the hall toward him.  He bounces back pretty quickly though and will come right out when I call him.  He tried to come out of the bathroom last night with me, but considering it was 3am, I vetoed that maneuver.  However, based on that, I may try that as my next step.

He is still vocal - likes to talk to me when I am spending time with him.  But still growls and hisses at the kittens and I am not sure that is really what he means.  Plus we have to work on the biting thing....he doesn't do it hard enough to draw blood, but he doesn't have any inhibitions either.  I am hoping he will get comfortable coming out into the living room with everyone and when he tries it on the adults they will teach him some better manners.

For now I am very proud of his progress.  Now to find the right family to adopt him....that is the challenge.
Posted by Random Felines at 10:14 AM